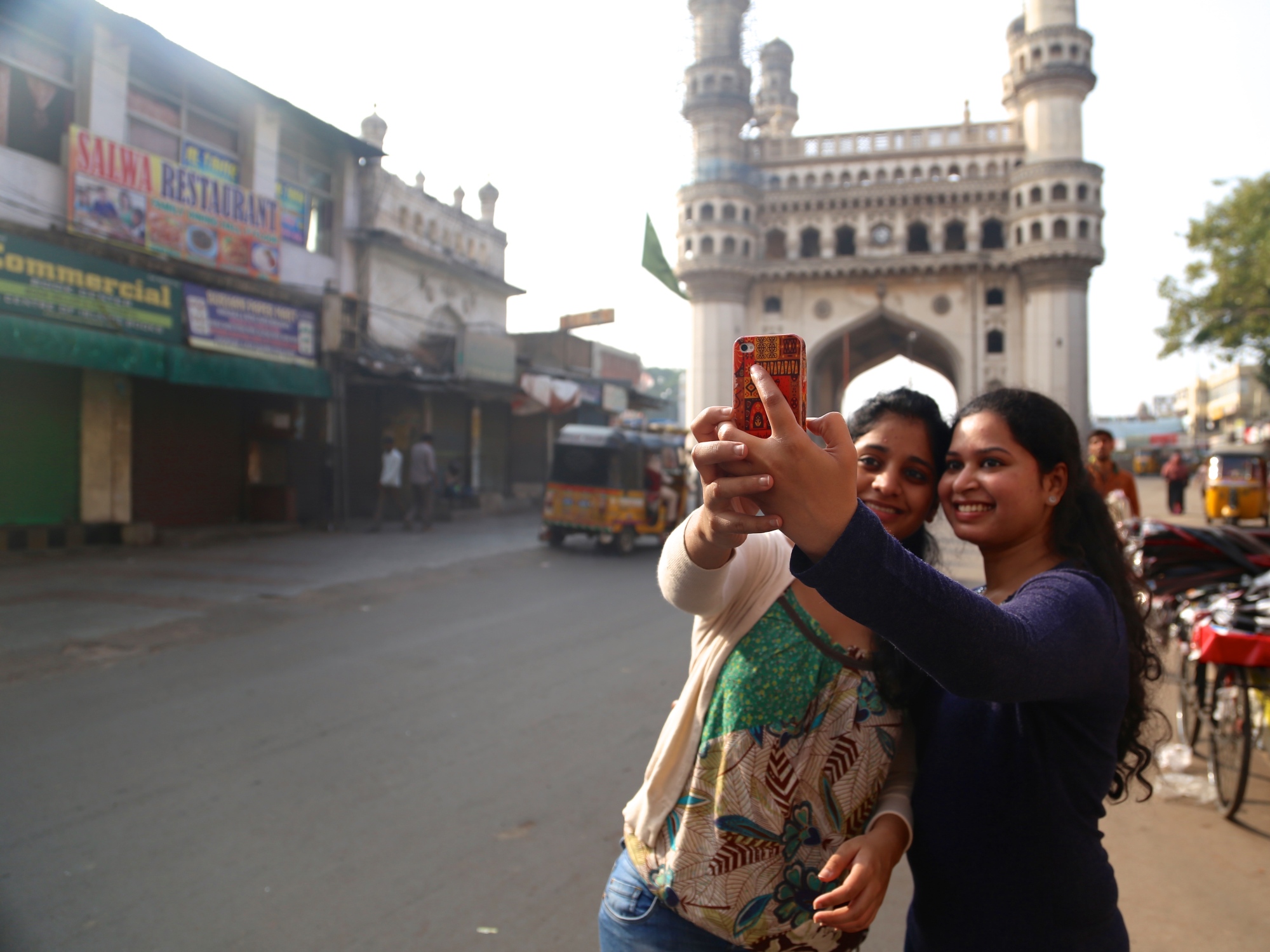 Raghav (real name not changed) woke up today at 5:30AM with a startled look on his face, worried if he is late for the mission. His wife wondered asked him why is he up so early. He told her, there is a project discussion with Sai (such a weak lie). I woke up at 5:45AM and checked if there were any missed calls from any of the accomplices for the Sunday morning mission. There were none and I was little worried. I called my niece Anusha (again real name) as part of pre-agreed wake up call protocol. She answered the phone (which she never does, if someone calls at her at that hour) with sleepy tone, I reminded her about the plan. She said she is on board again in a sleepy voice. Before I hanged up, I reminded her that this call is not a dream, and that she needs to be ready in 45 minutes to start for old city. She chuckled, and said another friend of her (also Anusha, now referred as Anusha-2) is also joining the mission

I walked to Revanth’s room, and as usual banged his door for 100 times (real number), before he answered with a feeble voice, and walked to the door in slow motion. I reminded him about the plan. I got a WhatsApp message from Srikanth, “Are you in Hyderabad”, and checked if the plan is still there. I assured him of the same. I walked to Aniketh’s room, he woke up immediately (as usual), and he looked me weirdly waking him on a Sunday morning. I reminded him of the mission. He became active immediately.

Planning was unprecedented. Accomplices have been carefully chosen. Pick up points have been coordinated and identified. Respective spouses have been discreetly alerted about the morning plan, without giving too many hints. Vehicles have been marked. Secret place near old city has been marked on GPS device. Various devices have been charged, and back up devices have been identified.   One of the device has been installed on the car. Raghav was ready with his passport to fly to US this evening, irrespective of what happens in the morning. Murphy was right. Yes, our plan went awry. Raghav said, he will never be the same person, he was before he woke up 05:30 AM this morning.

All of the above planning was to indulge in a million caloried dosa at Govind ki Bandi (cart). Last time, this much planning was done for Laxman Dosa, and Dosa @ Ram Ki Bandi (both of were featured in my earlier blogs)

It took an hour to get Aniketh and Revanth to be ready, which still can be considered as record, given that it is a Sunday. Radhika was not pleased for so much excitement for calories ridden Dosa. I continued to keep tab on Anusha (who said, another Anusha is also joining the mission), to make sure that she does not doze off . I told Raghav that I would pick him up at Masab Tank area, and Srikanth at Oasis school to avoid redundant vehicles on the road and keep the planet green.

I have attached GoPro to my car, which was being driven by Revanth, and got into the car at 7:15AM. Picked up Srikanth at 7:30AM, and Raghav at 7:45AM. Meanwhile, Anusha started from Secunderabad around the same time, along with Anusha-2 and Phani. I told her to turn right at water fountain (which is not working for last 50 years) and is just 300 meters ahead of Charminar, and asked her to stop at first Dosa bandi which she spots on the left side, which I later learned that I gave her wrong address.

Raghav as usual was excited as we were reaching Charminar area. Like so many Hyderabadis, he has never seen Charminar. We have done perambulation of Charminar in the car (which can you see in the below video footage). Raghav also on the cloud 9 that he is going to have much discussed / much hyped dosa. Again, Raghav gets so excited so easily.   We stopped the car at the Dosa bandi, which we thought it as Govind Dosa bandi. We spotted about dozen folks at the bandi, and both Anusha 1 and Anusha 2 were already in bliss, digging into Dosa.

Srikanth quickly placed an order for 5 butter dosas. Then Anusha-1 revealed that this is not Govind Dosa bandi, and that it is Ravi Dosa bandi. Anusha-1 and Anusha-2 quickly added, “This Dosa tastes so better”, before I could propose to go Govind Dosa bandi (which I have never been to).   It was already a long drive, so we decided to explore newly Discovered “Ravi Dosa”.   Raghav watched in amaze, making of one of the most caloried dosa on the planet (which can be witnessed in the footage).  I plead with Ravi to make my Dosa slapped with light amount of butter. He politely denied it saying, it would taste better with one pound of ghee on it.

While waiting for Dosas to be served, we ordered Idlis, which can also be considered as Most Caloried idlis on the planet/universe. They are pan fried, and topped with butter and spicy powder, and accompanied by chutney. Raghav commented, “I never thought, Idli can be so tasty”.   After indulging into Dosa, I looked around the place for a place which serves Tea. We spotted Agra Mithai Bhandar. Raghav proactively volunteered and placed order for 6 cups of Ginger Tea, and got them served to us at the Dosa Cart.

We ended our rendezvous, with a walk to Charminar, and did the mandatory photo shoot, and few selfies.

My Verdict on Ravi Dosa: Laxman Dosa recipe is now cloned across the town. All Dosa carts town are now promoting the unhealthy recipe of slapping loads of butter on the Dosa. There is no point in driving far away from home to get here, unless it is once in a 6 month fun trip. My kids and their cousins loved it, and already asking, “When do we go there again ?”.  I am in no hurry to honor their request

Video of making of “Ravi Dosa” 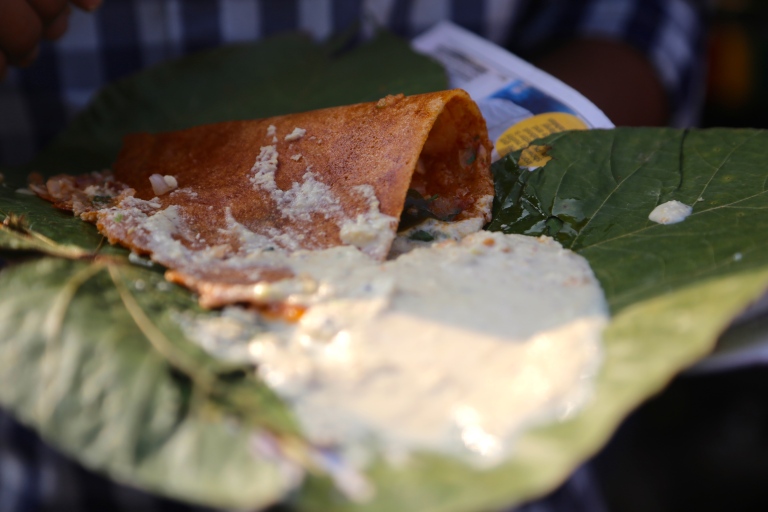 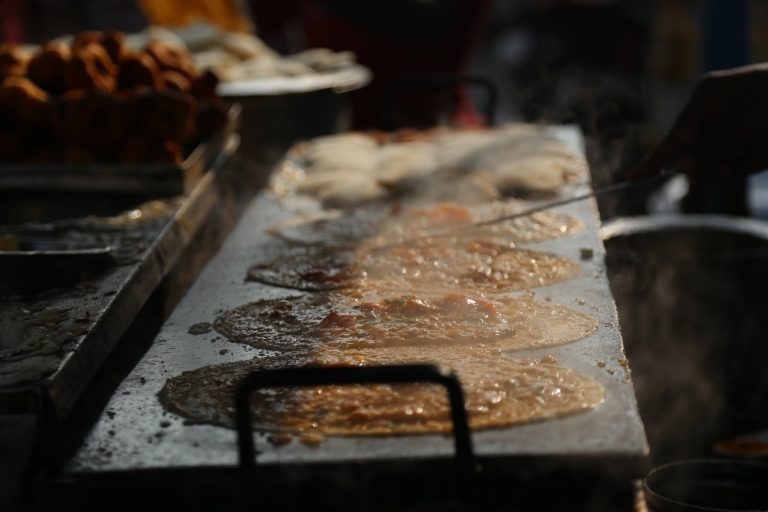 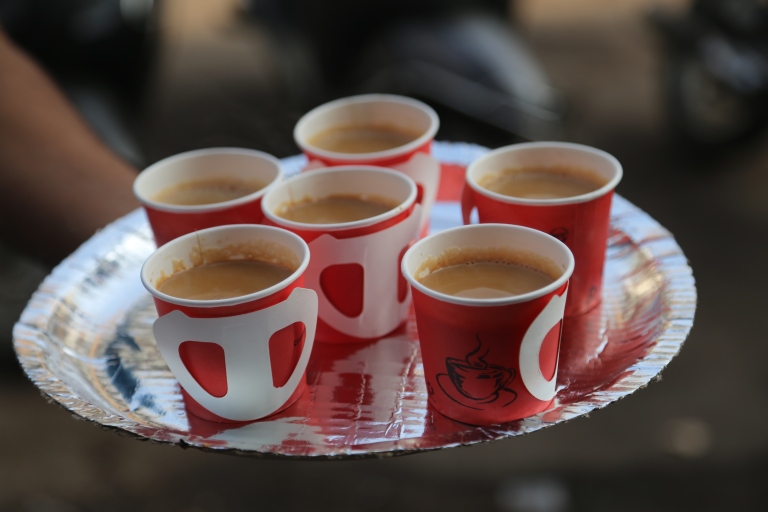 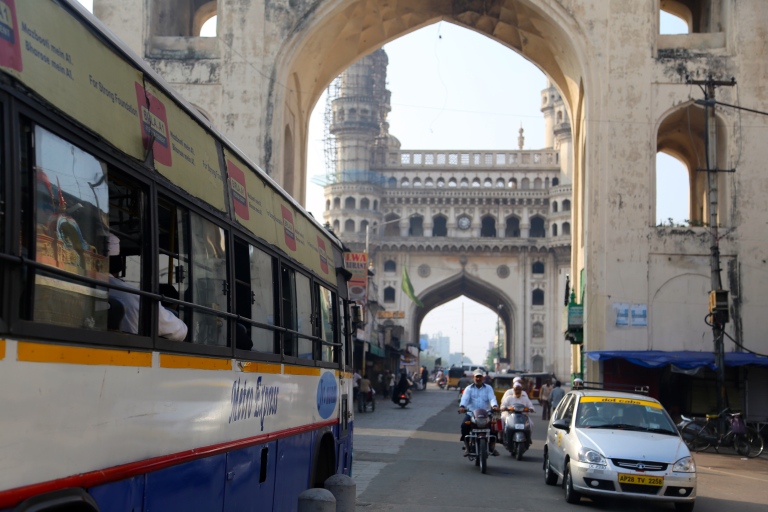 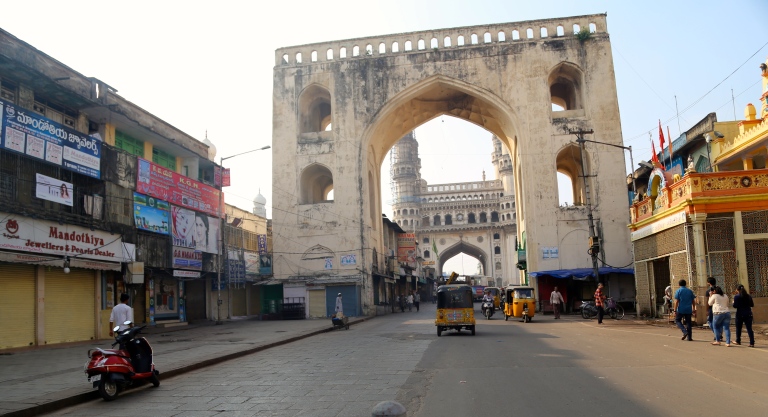 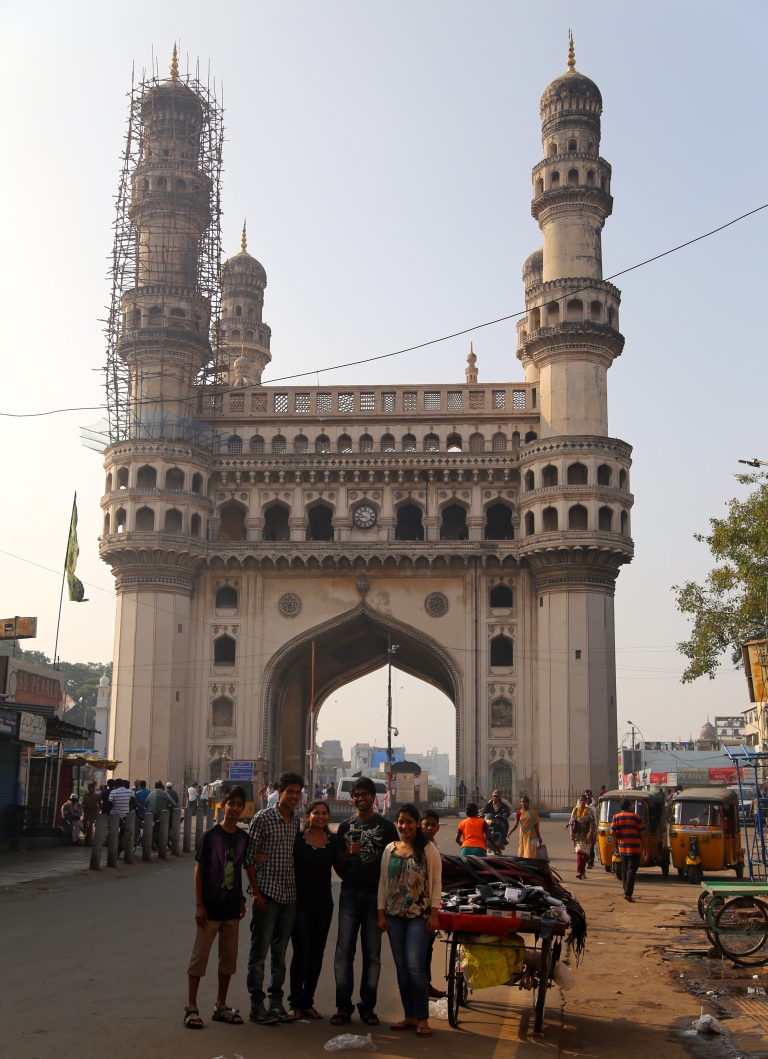 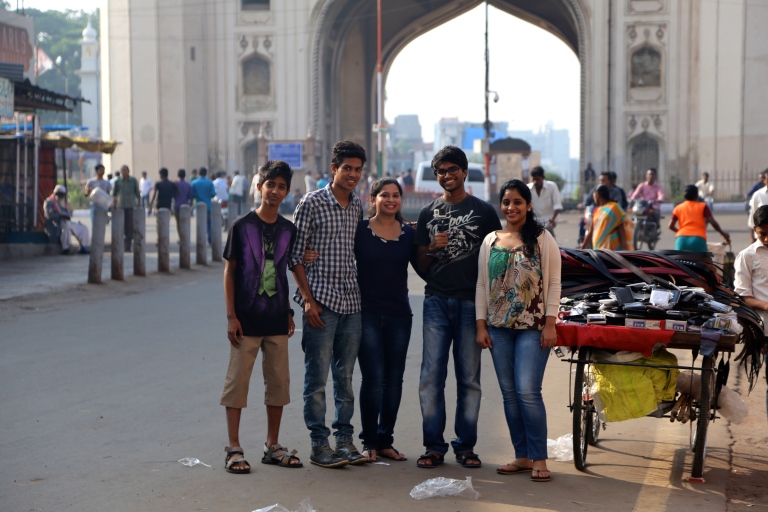 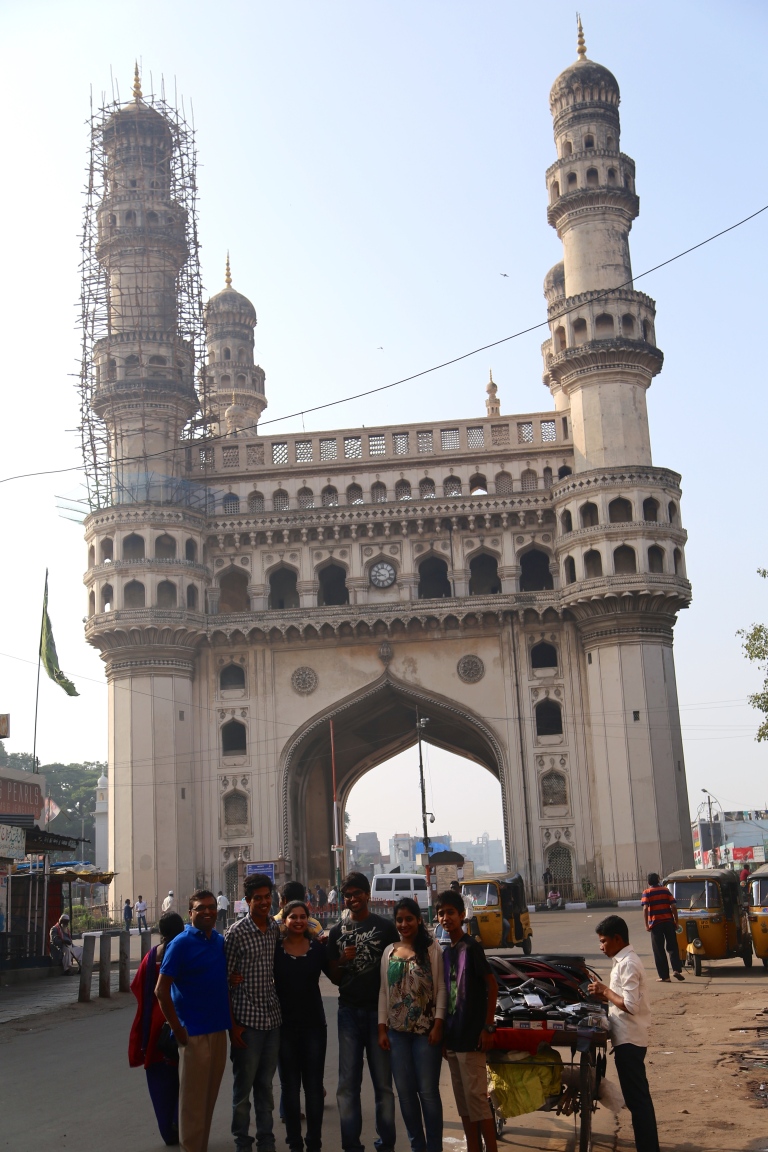 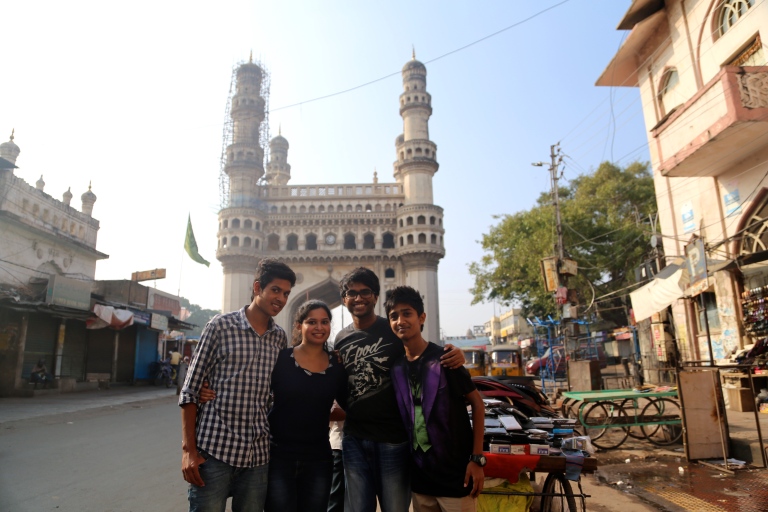 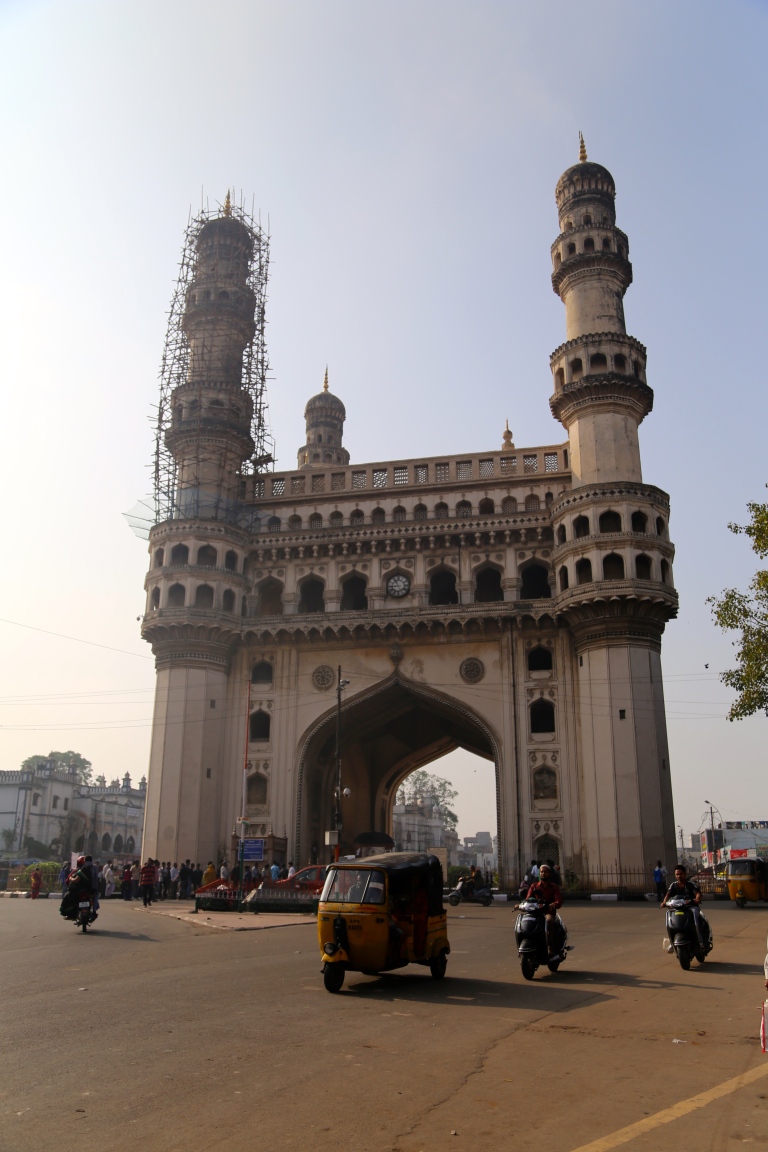 6 thoughts on “Journey for “Govind” Dosa”