It was an interesting and eventful 6 days with East Brunswick as my new base, and travelling around PA, NJ, NY, and CT meeting clients, prospects, colleagues, friends, roomies from 90s, buddies from 80s, and making some new friends.  Here are some experiential stories from this week.  Now eagerly and happily heading home to Hyderabad.

I had landed in EWR at 11PM about a week ago, and proceeded to my baggage claim, and started towards shuttle car, to pick up the rental car at Budget location.  Just about that time, my S7 forced a shutdown and did not re-boot and went cold.   Now that I had lost habit of driving around without Google Maps, it was like world crashed up on me.  Given that its been a while driving in NJ, I couldn’t risk missing just too many exits on the way to Hilton, and could not imagine driving to my destination without GPS around midnight. It felt like, just too many of instructions to go through the offline directions on Google Maps on Mac Air. So, I took a 30-min taxi to Hilton.

Life without a working mobile for 30 minutes as I headed to Hilton on Taxi at 11PM, seemed like eternity.  I felt, as I am alone in the universe, and was one step away from getting enlightenment. I kept thinking, how do I tell the world where am I, what am I doing, wondering what’s happening out there in the world, what do I with my life until mobile starts working, what’s purpose of my life, how do I tether to Mac, and so on.   So, many thoughts went into my head.  I reached Hilton and got into the room wondering purpose of my life, and my S7 started working on it’s own, and life appeared to be normal out of nowhere.  I was on a 12 flight to Doha from JFK, without a net connection, but I did not go through any emotions.  I guess just the feeling that there is a working mobile (thought without the net), might have given that comfort J.

This weekend, LN, and I visited at Praveen’s house (in Long Island) ahead of his upcoming “Big” birthday.  I stopped using numbers as prefix for birthday, as they do not appear ‘appealing’ anymore.  As a trio, we met about 20 years ago, so it was fun reliving memories from the past.  On Saturday evening, we took a trip to Manhattan (where else would you, when you live so close to it), walked around the city that never sleeps, and had a mandatory Chai and Latte at Starbucks, and stayed awake through the early morning chatting away

During this week, I also took a long drive of over 2 hours to meet a client in Norwalk, CT.  Roads and surrounding appeared so beautiful, as soon as I entered CT.  There were lush green meadows / tree on either side of the freeway, and huge trees in the median too.  It was endearing to meet JS a colleague from AppLabs in Stamford, who took an hour break during work day, and help me shop for a beautiful cake for Praveen (see below).

I also had a chance to meet Nanda near East Brunswick, my roomie from Texas A&M, at his impressive and sprawling home in Holmdel, which is surrounded by lush green meadows, where a group of deers, and fox regularly visits their backyard.  Since I have visited his home at the night, I could not take any pics of the neighborhood.   He along with his beautiful family hosted me for a Dinner at Olive Garden, and then we watched first Presidential Debated between Trump and Hillary

As a visitor, it is always fascinating to reach / pass  NYC via various combinations of bridges and tunnels.  It is usually daunting / confusing as a visitor, but once you are in town for a week or two, I felt one do not need a GPS to go around the city. I captured some of the footage of my drive via NYC during last week, using GoPro, which can be seen below.

Here are few pics and videos from various events from the week. 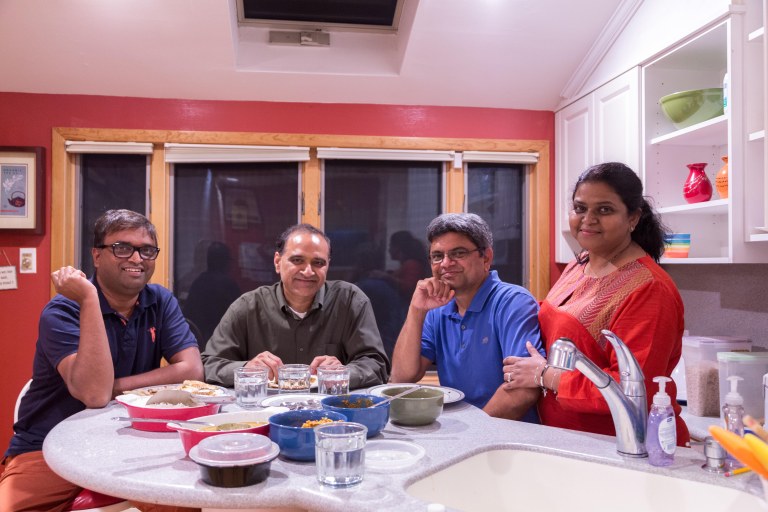