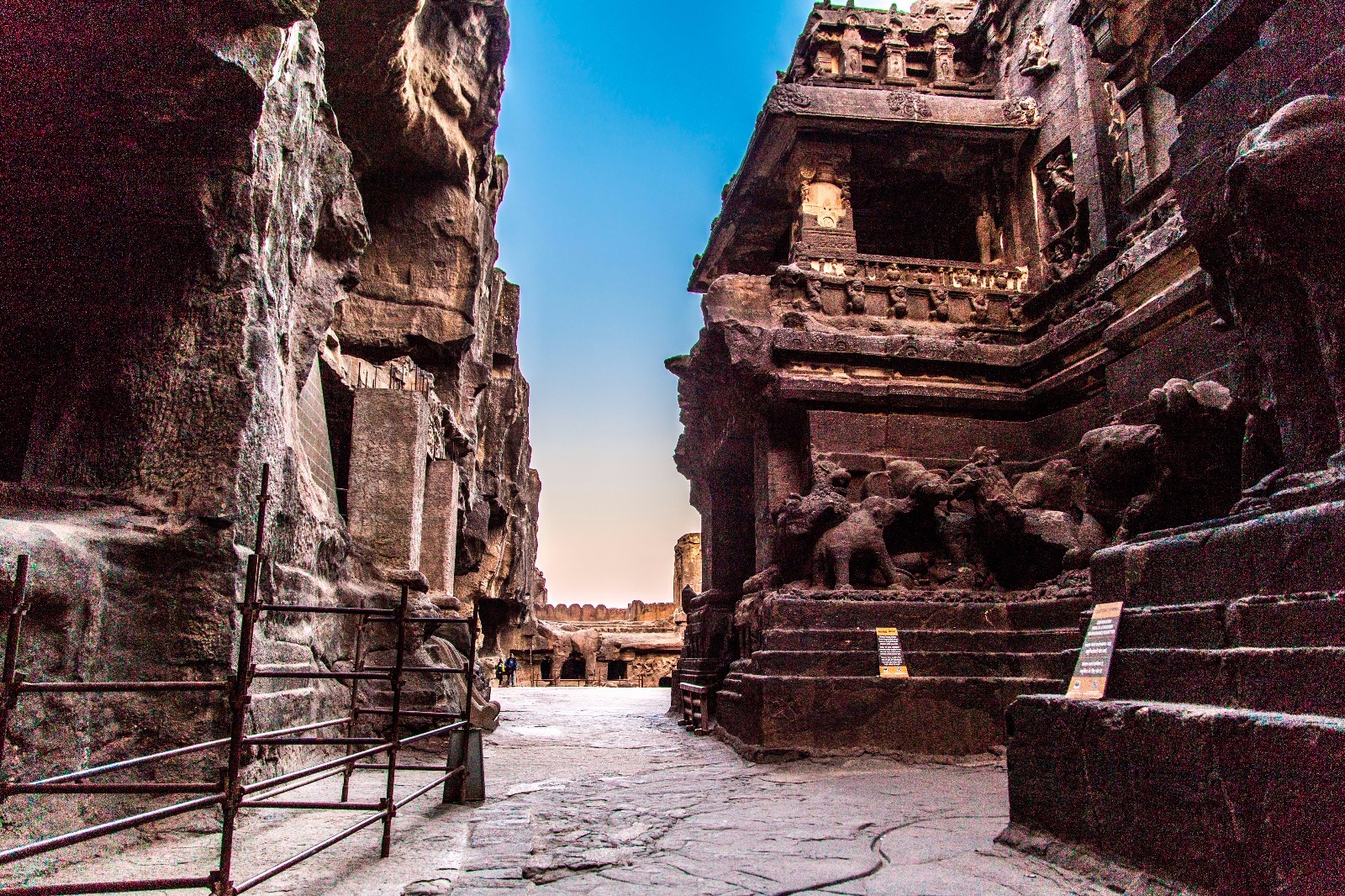 I have added Ellora Caves to one of the ever growing list of places to travel, when I saw a video (on youtube) which discussed mystery behind this mammoth temple sculpture that was chiseled out of a mountainous rock, over a period of couple of centuries.   Finally, I got an opportunity to explore enchanting caves of Ellora, along with my colleagues Sairam and Krishna. We spent Saturday afternoon and and Sunday morning’s golden hour (as we wanted to shoot pics without anyone around us, and do a meditative walk around the Kailasa Temple).  This morning, we were the first few visitors who visited this cave armed with a GoPro and a 6D.  Read on below, to see what we found in the Cave number 16 of Ellora Caves.

Cave number of 16 of Ellora caves is dedicated to mystical Kailasa temple (World’s largest monolithic sculpture), which seemed pretty much or almost impossible to be built by humans.  This temple is chiseled out of a huge mountain rock (via top down, instead of traditional bottom up approach) by scooping out 400,000 tonnes of rock in a span of ten generations, in an era where there was minimal/zero instrumentation.  The temple has intricate sculptures, huge cantilever beams without any support, fine carvings of Ramayana and Mahabharata stories on the rocks, conveniently designed stair cases going up / down, balcony with awesome views, paintings which lasted 1000s of years, and a massive a Shiva linga and more.

Though significant number of sculptures were destroyed by some of the rulers at that era, it is a still great place to visit to see what our ancestors could accomplish and build with such a precision.  It is baffling to see that architects of this structure had a vision and clear end goal a century or two ahead and successfully passed the same for next several generations (super cool Knowledge Transfer process, I guess) and ensured its execution to perfection.  It is not easy to justify the experience of our visit using few pics.  We and many others who were exiting the temple were wondering why this temple did not make it to the list of world’s wonders.

Check out the part 2 blog to see the pics from other caves that we explored.  There are total of 34 caves, depicting amalgamation of Hinduism, Buddhism and Jainism. Cave 1 to 12 are dedicated to Jainism, 13 to 16 for Hinduism, and rest for Buddhism. 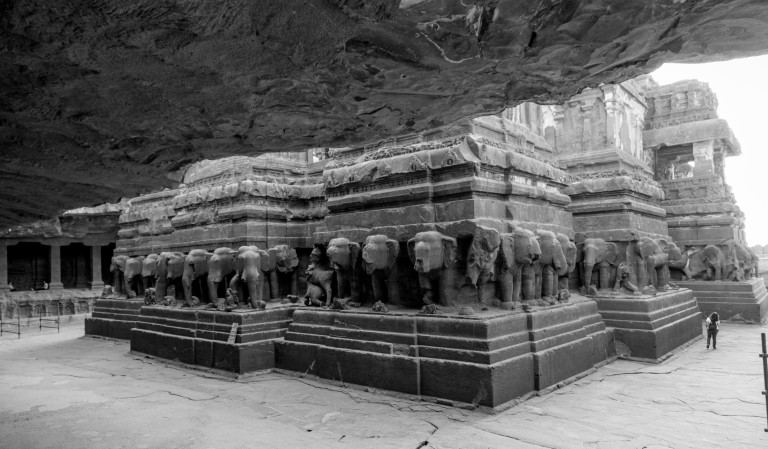 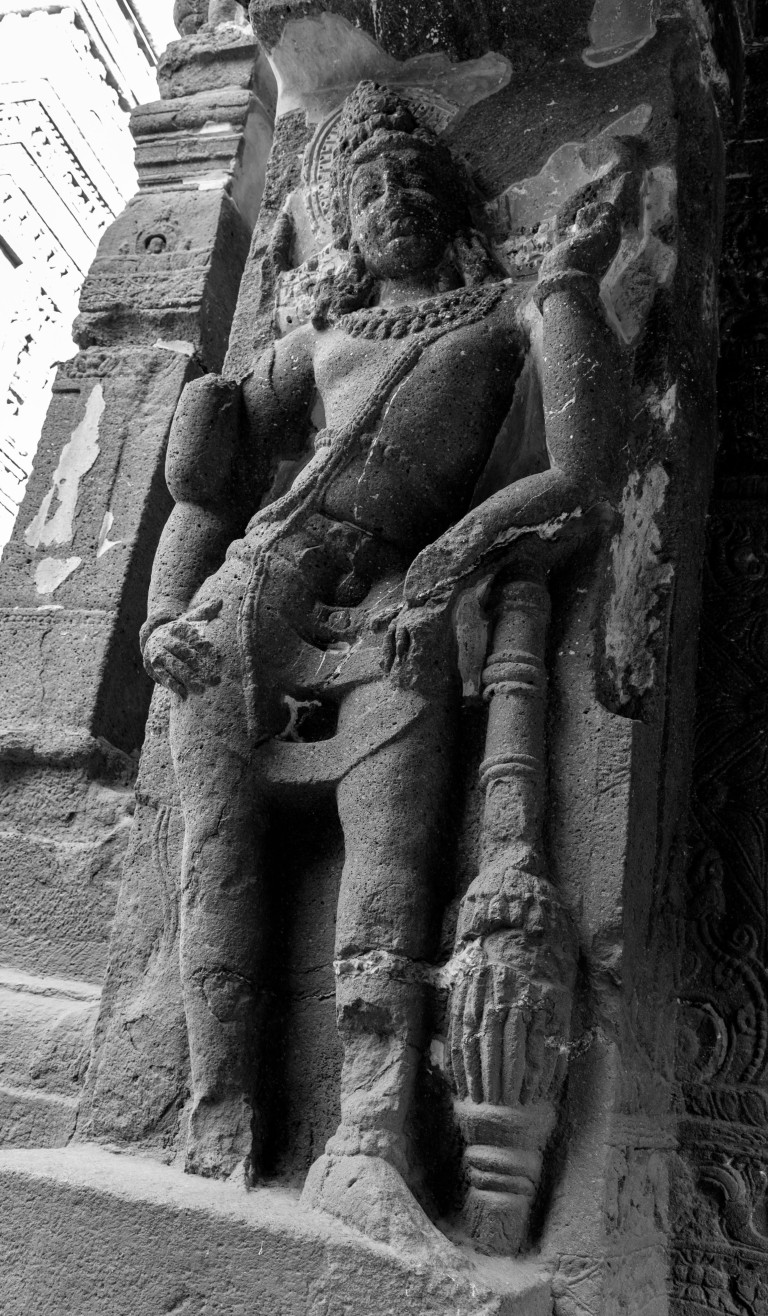 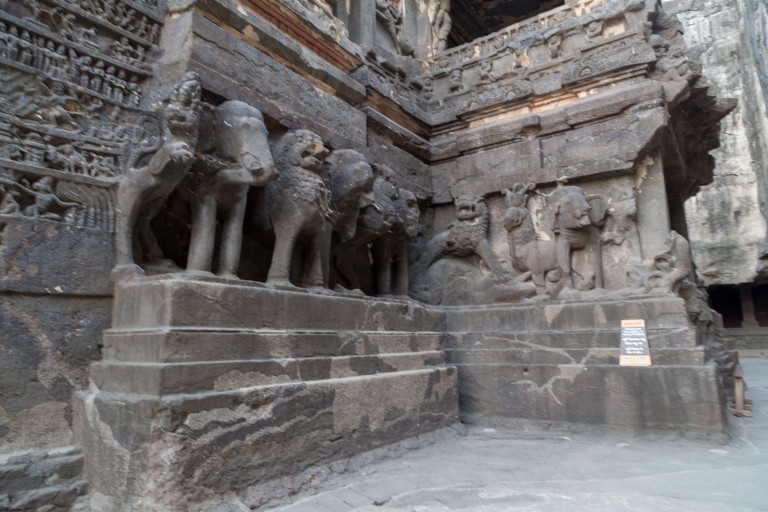 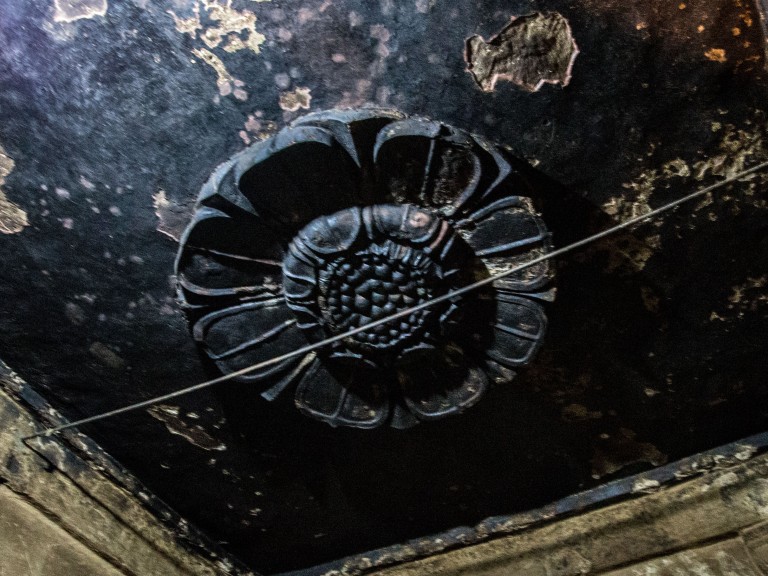 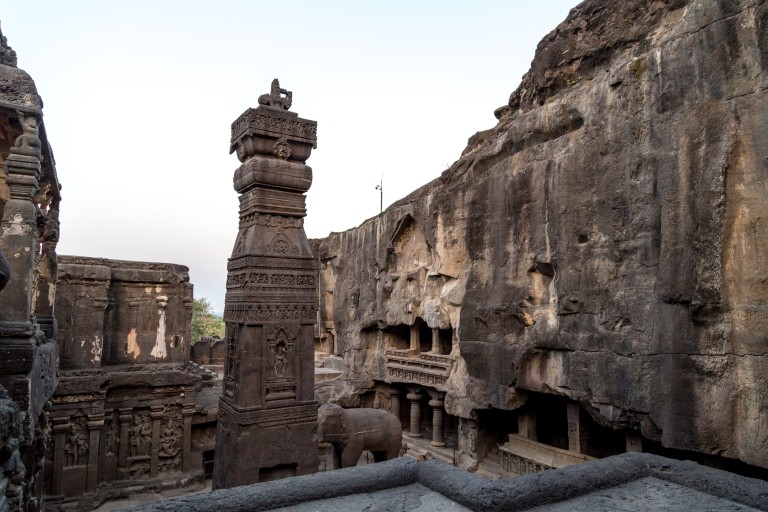 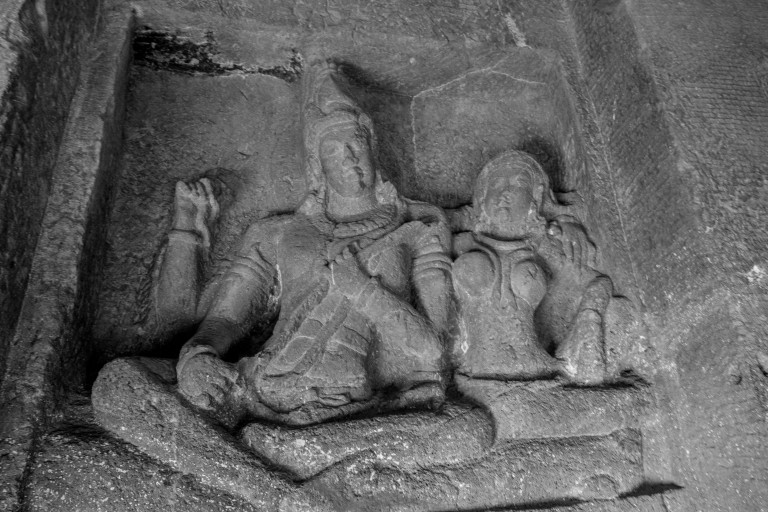 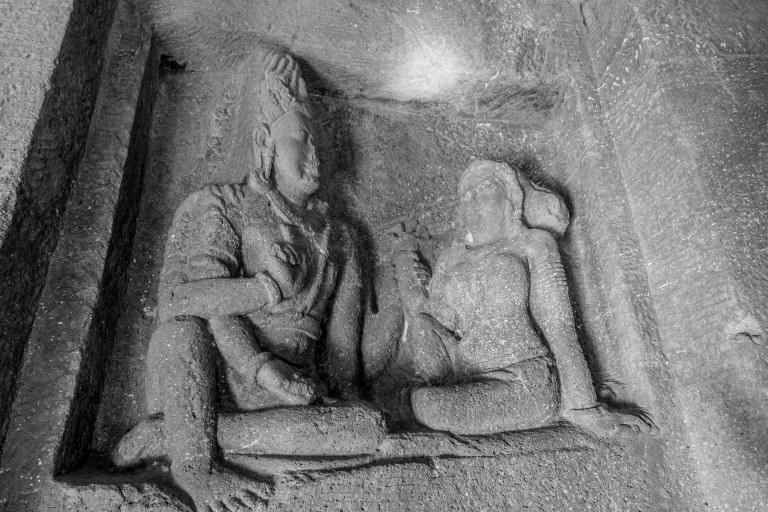 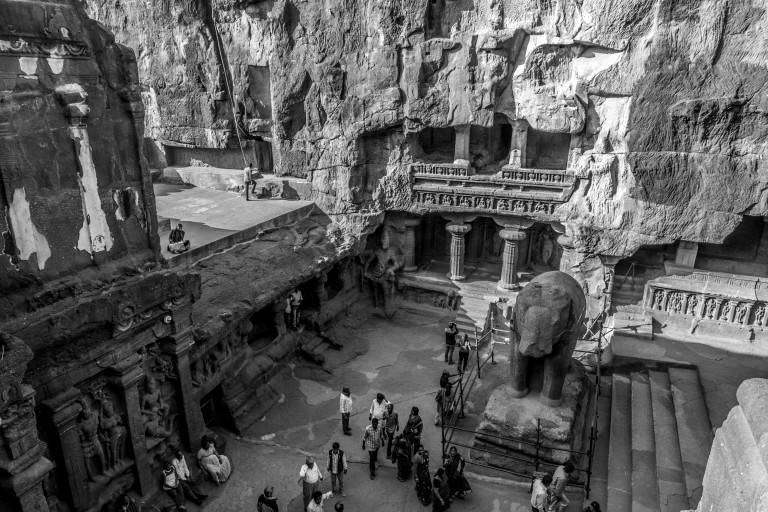 Cave 16, also known as the Kailasa temple, is the unrivaled centerpiece of Ellora. This is designed to recall Mount Kailash, the abode of Lord Shiva – looks like a freestanding, multi-storeyed temple complex, but it was carved out of one single rock, and covers an area double the size of Parthenon in Athens. Initially the temple was covered with white plaster thus even more increasing the similarity to snow-covered Mount Kailash.

All the carvings are done in more than one level. A two-storeyed gateway resembling a South Indian Gopura opens to reveal a U-shaped courtyard. The courtyard is edged by columned galleries three storeys high. The galleries are punctuated by huge sculpted panels, and alcoves containing enormous sculptures of a variety of deities. Originally flying bridges of stone connected these galleries to central temple structures, but these have fallen.

Within the courtyard are three structures. As is traditional in Shiva temples, the first is a large image of the sacred bull Nandi in front of the central temple. The central temple – Nandi Mantapa or Mandapa – houses the Lingam. The Nandi Mandapa stands on 16 pillars and is 29.3 m high. The base of the Nandi Mandapa has been carved to suggest that life-sized elephants are holding the structure aloft. A living rock bridge connects the Nandi Mandapa to the Shiva temple behind it. The temple itself is a tall pyramidal structure reminiscent of a South Indian Dravidian temple. The shrine – complete with pillars, windows, inner and outer rooms, gathering halls, and an enormous lingam at its heart – carved from living stone, is carved with niches, pilasters, windows as well as images of deities, mithunas  and other figures. Most of the deities at the left of the entrance are Shaivaite (followers of Shiva) while on the right hand side the deities are Vaishnavaites (followers of Vishnu). There are two Dhvajastambhas (pillars with the flagstaff) in the courtyard. The grand sculpture of Ravana attempting to lift Mount Kailasa, the abode of Lord Shiva, with his full might is a landmark in Indian art.