As part of my Sunday ritual, I started this morning writing my blog on events around my life, all while sipping hot chai (served on my bed, a perk of being at home in India) . Writing and clicking something is very easy, when I am on the road/air/water. However, I thought I would write something up to document my tryst this weekend, which involved an Ant-Man, brunch @ a newly discovered Bagel place, rendezvous at Awards Nite, savouring delicacies from an ayurvedic cooking class, and finally a story behind group selfie with friends @ Cigniti. All of them are just few scrolls away via my photo blog of the weekend

When I heard about “Ant-Man” as the name of the next flick from Marvel coming, i really laughed out.  I  never read Marvel Comics, though I have watched almost all movies from this franchise.  So, obviously, I never heard Ant-Man before, and immediately ruled out watching a movie with a cheesy title “Ant-Man”.  When my kids said that “Ant-Man” character would have been featured in previous Avengers Movie, I thought they were joking. Then I saw the trailer, and felt it is not so bad and illogical after all.  Since there was not much to do on a Saturday night, I saw the movie along with my kids, and felt it is not so bad after all (contrary to the cheesy title of the character and the movie name) 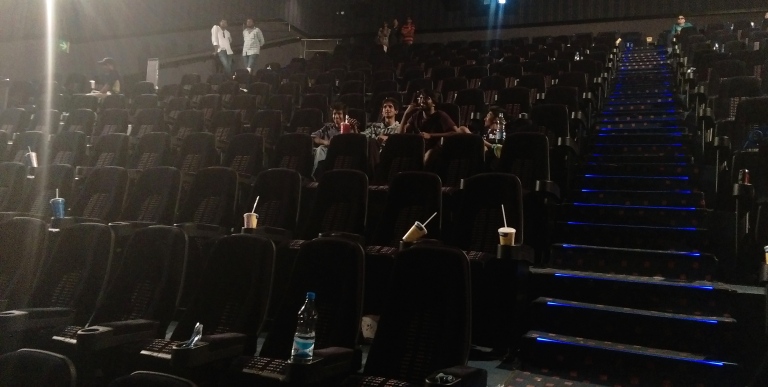 My kids waiting almost alone in the theatre (though show was a sell out) for the credits to roll out, and take a peak at potential sneak preview of scene from next movie from Marvel series.  It was clear from the sneak peak that ANT-MAN 2 (or may be ANT-GIRL) is coming soon

Toasted Sesame Bagel with cream cheese has been one of my favorite breakfast combo, when I lived in US.  I still make a point to stop at Einstein Bagels and try varieties of bagles for breakfast, lunch, or sometimes dinner too, whenever I am in US for a short gig.  I had stopped by Griffin’s (relatively new bakery in town) yesterday afternoon and was pleasantly surprised to see Bagels (and Bagelwiches) being listed on the menu. You can easily guess that I was more than happy by the overall appearance, texture, and taste of bagel. Cream cheese could have been little better. Revanth choose to try classic tomato and cheese sandwich, which he claimed to be quite good too 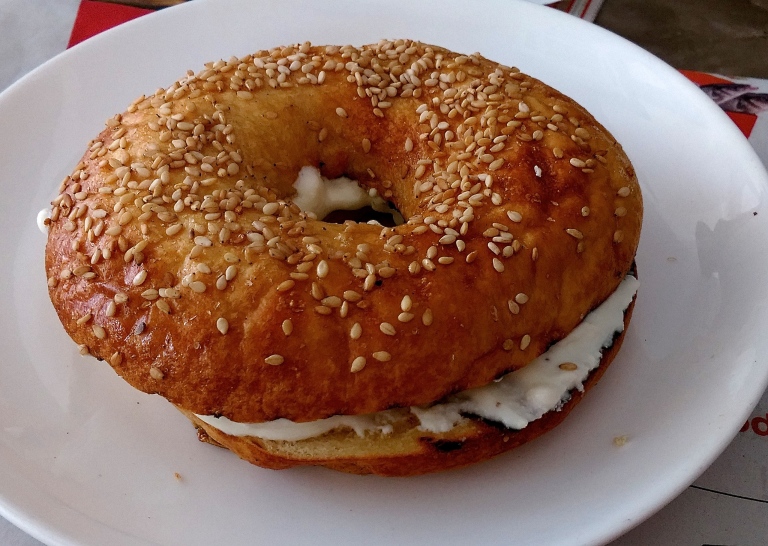 Thanks to my colleague Sairam, I had a chance to attend annual awards night conducted by MAA TV.   He had two VVIP tickets to the events, invited me to accompany him, for the event @ Novotel.   It was an high adrenaline event, attended by who’s of who of Telugu Movie industry.  Yesteryears movie star “Kirshna” was felicitated for “Lifetime Achievement” award for his contribution to Telugu Movie industry by acting in over 350 movies, and his contribution to technology advancements in the film Industry.  I had a chance to see many of the film industry celebrities such as Mahesh Babu, Nagarjuna, entire family member of Krishna (all three generations),  Jaya Sudha, Jaya Prada,  Raghavender, Jagapathi Babu, Sumanth, and other leading producers and directors quite close and personal.   Actress Anjali and her team did an awesome dance to lovely medley of latest hit songs from telugu and hindi movies.  Popular musician Shankar Mahadevan performed Breathless song which made him famous, and tuned to many hits from popular Telugu movies.  Little kids (aged from 3 to 15) did a terrific display of their talent via medley of hit songs from Krishna’s movies.  Here are couple of clips I took via my HTC.  I just spend about 2 hours at the event, as my mind was already processing about next things to do, which is always related to either Cigniti or my family

Cigniti’s corporate services team initiated an employee engagement (and an internal competition) event this week, which encouraged Cigniti teams to take a group selfie in an innovative way.  I took the initiative for selfie comprising of folks from my own team, and several folks who interact with my team.  As I was contemplating for location of the selfie (to make the entire process little quick, as team is always busy), I saw our infrastructure person walking around with a ladder.  I quickly borrowed his ladder, asked Rickey to use the ladder to take below set of selfies, just around our workspace.  It took less than few minutes to come up with a group selfie 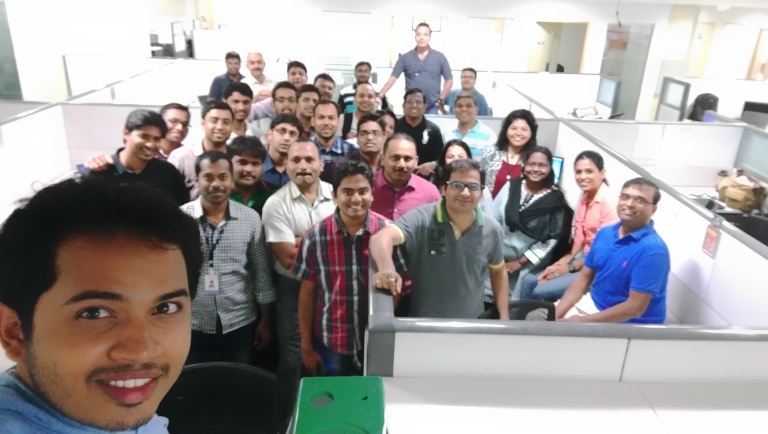 Radhika hosted 6-day long ayurvedic cooking class at our villa, which was conducted by AOL teacher Priti Mehta based on Mumbai.  I had no complaints, as I was treated with delicacies whipped by the teacher and students for all week long. Classes ended yesterday with all students bringing a dish that they whipped without using a drop of oil.  Here are the pics from the event.  If I get time, I would write more details related to the recipes of dishes you see in below snaps. Radhika mandated our kids (Revanth and Aniketh) to attend the class, to ensure that they will have more consideration of healthy cooking & eating (if not now, at least some time later in the life) 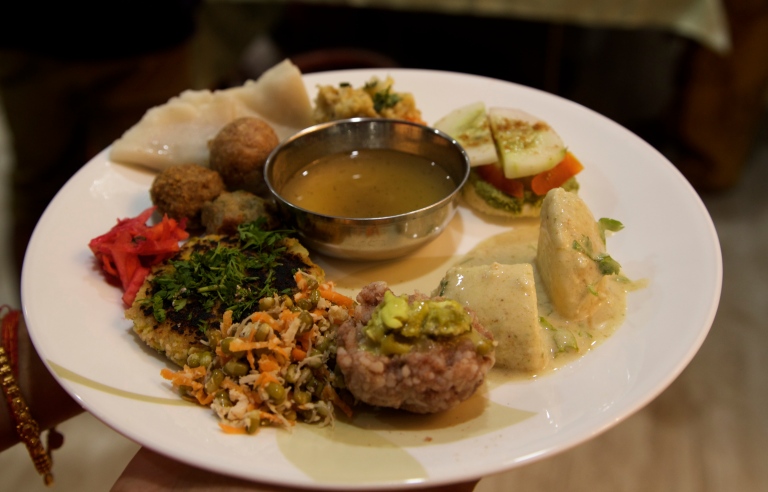 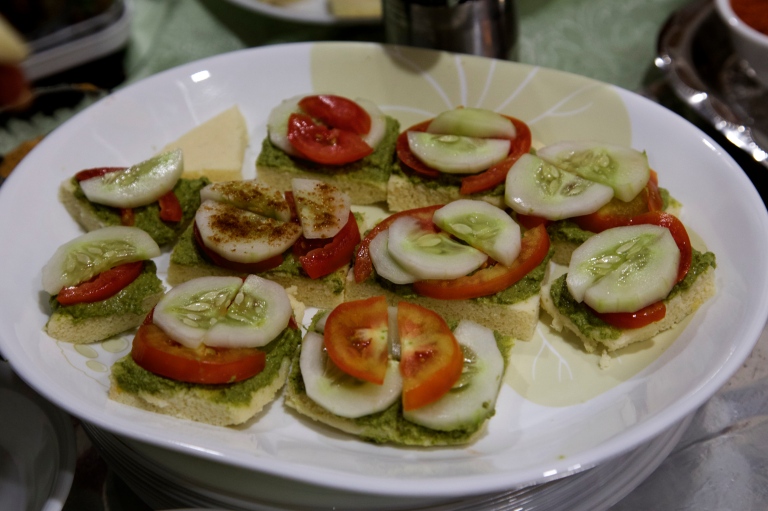 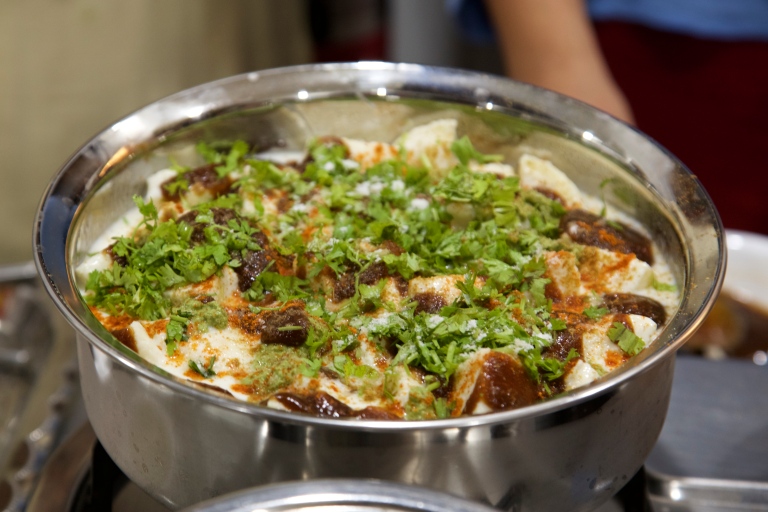 Students from the class 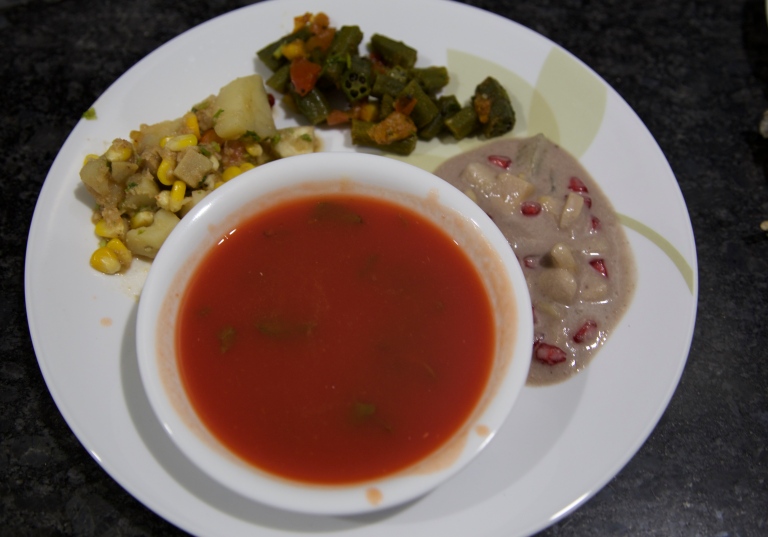