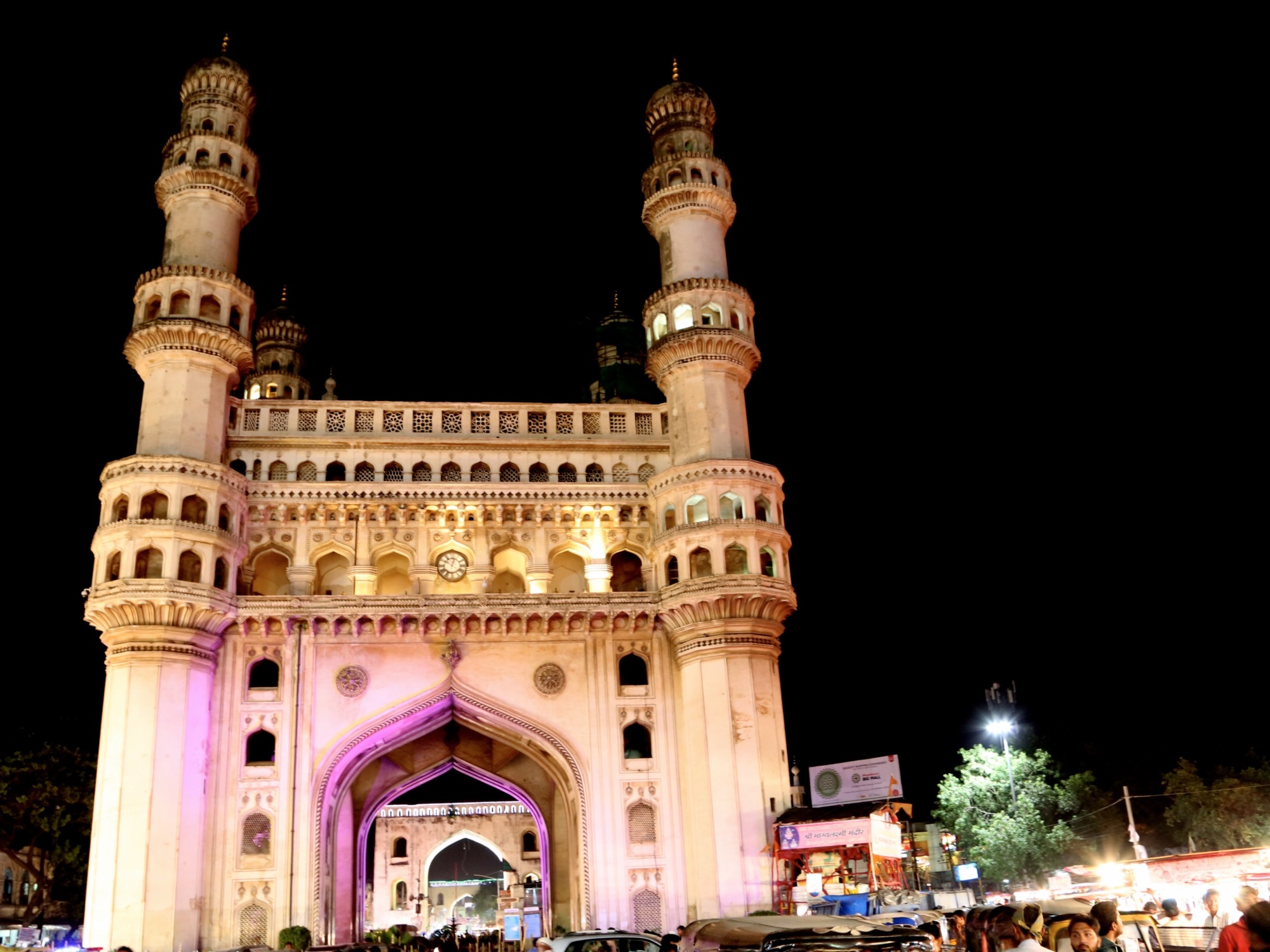 Charminar icon is forever associated with Hyderabad, and is often popular place to visit for anyone who visits Hyderabad, either for a selfie or pearls or bangles or authentic biryani & haleem. I have visited Charminar for the first time, when I was about 20 years old, though my grandparents was house was just 10 minutes way from this place. Now I get to visit this place quite often to accompany guests / clients who visits Cigniti.

Yesterday, few members of Cignipix club visited the place with a hope to capture light trails around Charminar. However, it wasn’t easy to capture any light trails as there was too much slow moving traffic (of all types) and we did not get access to roof tops where we can install our tripods.  We did bump into few dozens of photography enthusiasts who converged around the streets of Laad bazaar (via Meetup gathering initiative) and also surprised to find few other colleagues who were shopping in the street at midnight.  Contrary to our expectations, the streets and crowd was extra friendly, and many walked to us asking to take their photography and asking us to share them on their whatsapp.  Few said, “We will use this as our Facebook .  Many asked, if we are from any print media.

Here is the video and pics from our experience of driving & walking around Charminar area during very busy Ramzan night. Thought it was way past midnight, entire place was streaming with endless crowd, with all shops & stores doing brisk business, and street vendors whipping hot food.

Trivia about Charminar from Wiki:

The Charminar, built in 1591 CE, is a monument and mosque. Chār and Minar, translating to “Four Towers”; the eponymous towers are ornate minarets attached and supported by four grand arches. There are various theories regarding the purpose for which Charminar was constructed. However, it is widely accepted that Charminar was built at the center of the city, to commemorate the eradication of plague”, as Muhammad Quli Qutb Shah had prayed for the end of a plague that was ravaging his city and vowed to build a Mosque at the very place where he prayed

The Old City of Hyderabad was designed with Charminar as its centerpiece. The city was spread around the Charminar in four different quadrants and chambers, segregated according to the established settlements. The Charminar is a square structure with each side 20 meters long, with four grand arches each facing a fundamental point that open into four streets. At each corner stands an exquisitely shaped minaret, 56 meters high, with a double balcony. A bulbous dome crowns each minaret with dainty petal-like designs at the base. The structure is made of granite, limestone, mortar and pulverised marble.

There is also a legend of an underground tunnel connecting the Golkonda fort to Charminar, possibly intended as an escape route for the Qutb Shahi rulers in case of a siege, though the location of the tunnel is unknown. The monument overlooks another and grand mosque called the Makkah Masjid. Muhammad Quli Qutb Shah, commissioned bricks to be made from the soil brought from Mecca, the holiest site of Islam, and used them in the construction of the central arch of the mosque, hence its name. 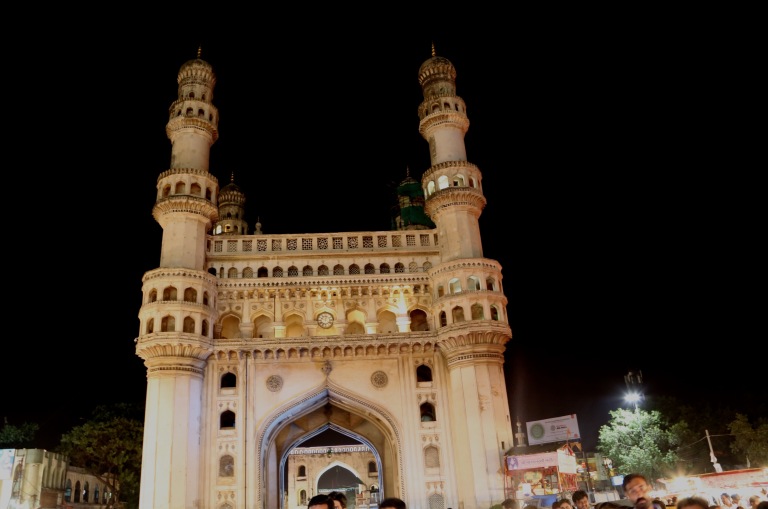 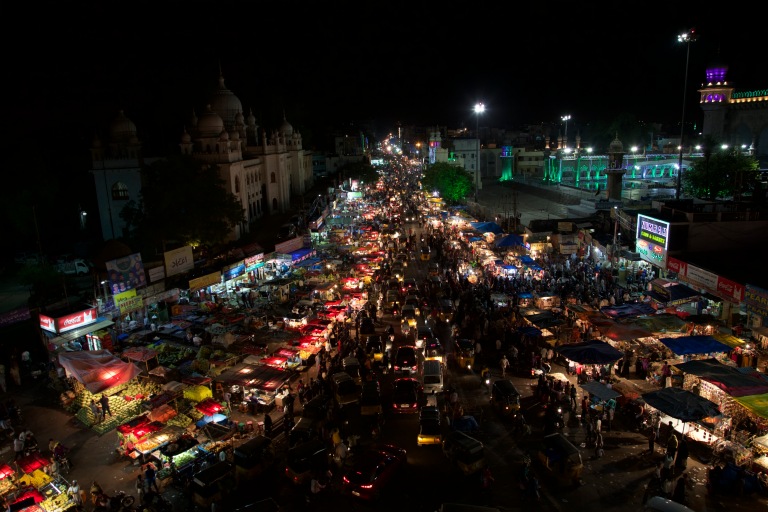 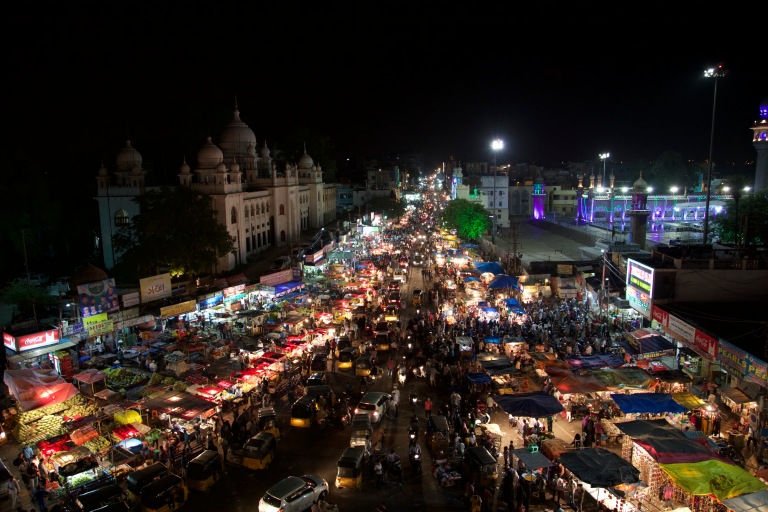 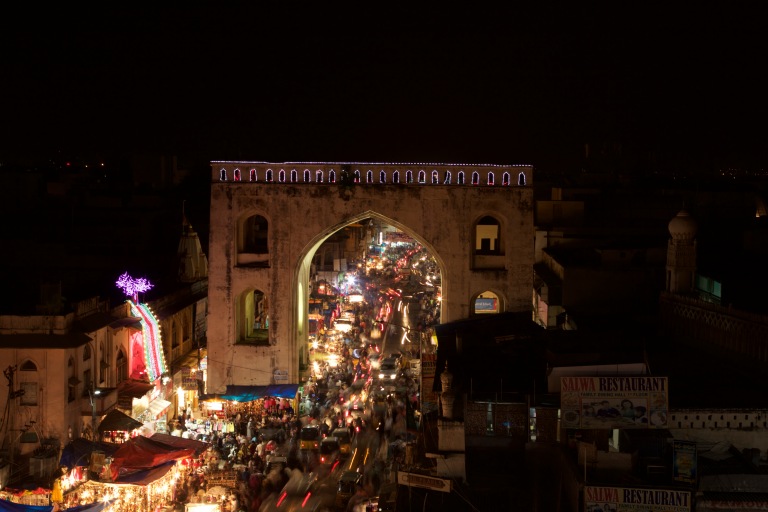 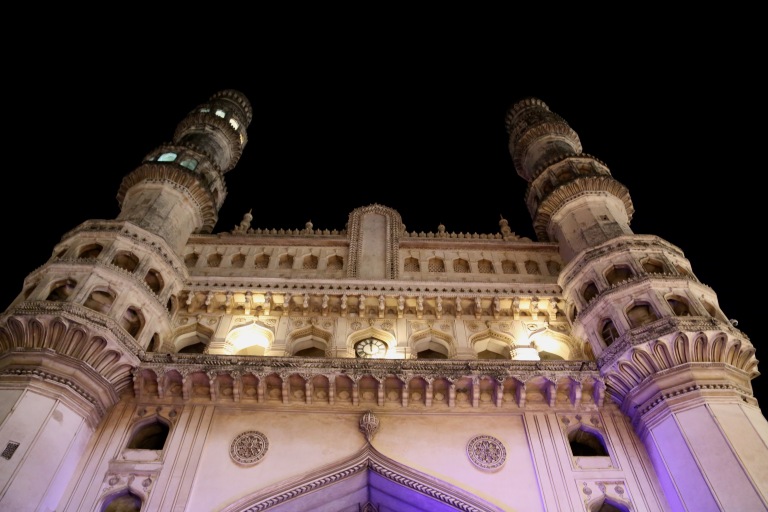 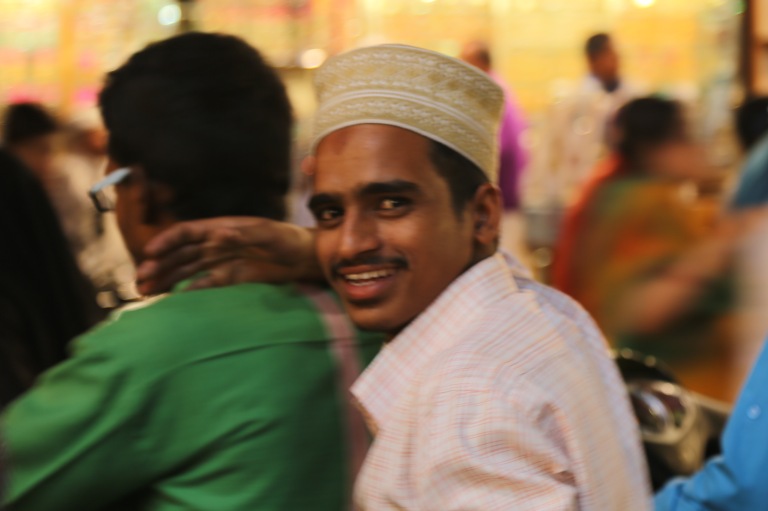 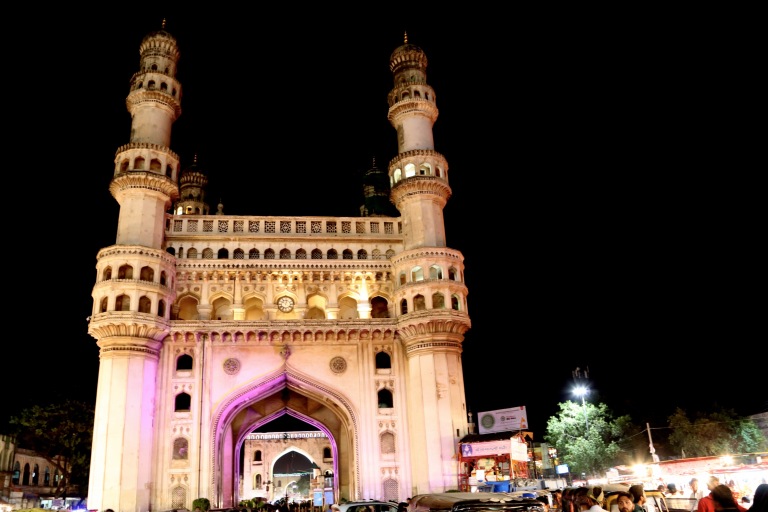 Pics from the team 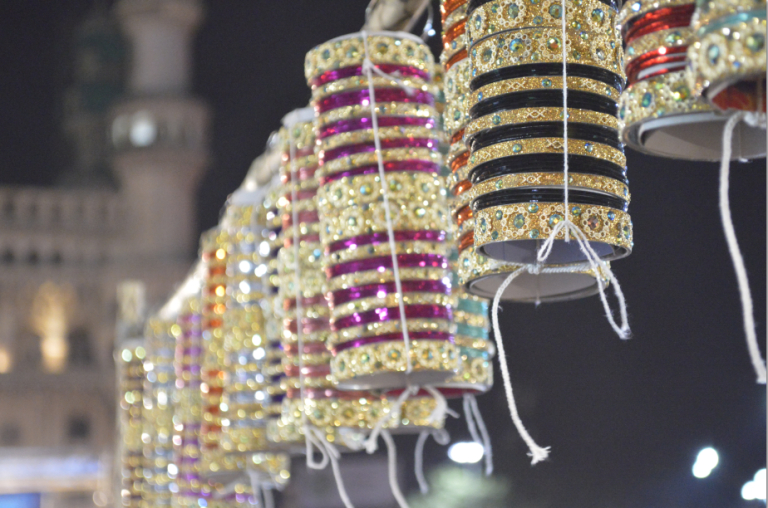 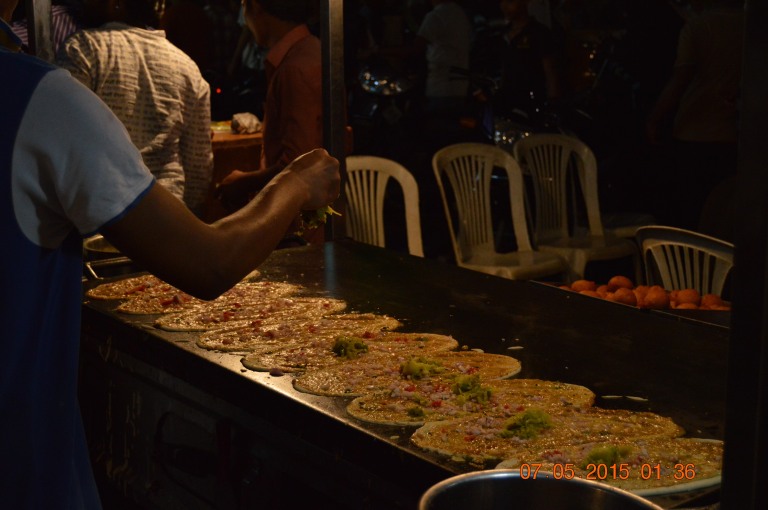 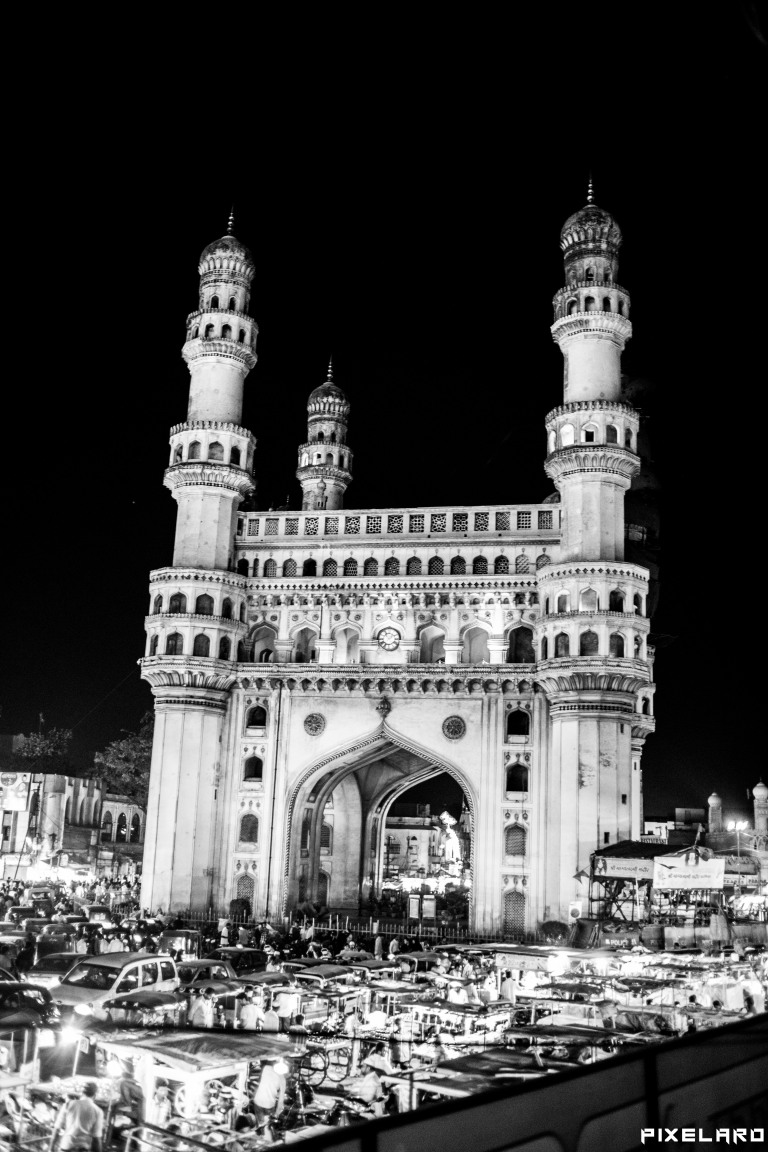 3 thoughts on “Ramzan Nights of Hyderabad”