We had a visitor (Sean Twyford) from Aussie region, who spent about a week here with us at Cigniti, Hyderabad.  There were only few hours allocated for usual city tour, because of hectic schedule throughout the week.  Originally, we planned for tour of usual suspects, but later cut down to just visit to palace,  both because of time available and hot weather.  Visit to Taj Falaknuma palace vows anyone on any given day, so we opted this as a prime choice of tour agenda.  I called the palace after getting into the car for  a lunch or hi-tea slot, with almost no hope of getting a slot, as they are always booked several days in advance.  However, they had just one lunch slot at Celeste Italian restaurant in the palace, so we grabbed it.  It takes about 45 to 60 minute drive via outer ring road to get to the Falaknuma Palace from Cigniti office.

We spent about hour and half at lunch and took a la carte option to order pizza, pasta, and soup.  Ambience of the overall palace was simply awesome. Food is pretty decent.  Again, food is not the prime criteria for one to visit this place   As we finished lunch,  weather turned cooler and skies started becoming dark, and entire view from palace balcony extra awesome and beautiful (which really can’t be captured on any camera).

I visited this place many times to host customers, but it was always during the dinner time.  So, experience was little different and extra awesome with dark clouds approaching the palace from the far end.  Watching sprawling Hyderabad from the balcony of Palace, reminded me of a scene from Lion King (which I had watched it several 100s of times in 1990, thanks to young Revanth at that time)

It’s hard for one to imagine that they are in Hyderabad, once they enter the palace. Place and the overall environment is quite surreal. As we walked out of the building, we saw a tour guide (who claimed that he is with Nizam family forever, and bestowed with responsibility of security for the royal family) with few visitors in the palace.

We joined the tour for about 15 minutes and got to see the much discussed mega dining table with 101 chairs. Tour guide asked one of the participants to go to far end of the table and whispered “Can you hear me ?” to demonstrate the amazing acoustics of the place, and the participant sheepishly whispered back “No” :-).  As we walked up/down the stairs of palace, whose sides are adorned with amazing oil paintings, it reminded of setting from Harry Potter, except that these oil paintings didn’t come alive talking to us (which would have been scary)

Falaknuma Palace is one of the finest palaces to visit in Hyderabad . It is on a 32-acre (13 ha) area in Falaknuma, 5 km from Charminar. It was built by Nawab Vikar-ul-Umra, prime minister of Hyderabad (which operated a like country at one time.  Falak-numa means “Like the Sky” or “Mirror of the Sky” in Urdu.

An English architect designed this palace. The foundation for the construction was laid by Sir Vicar on March 3, 1884. took nine years to complete the construction and furnish the palace. The palace was built in the shape of a scorpion with two stings spread out as wings in the north. The middle part is occupied by the main building and the kitchen, Gol Bangla, Zenana Mehal, and harem quarters stretch to the south. The Nawab was an avid traveler, and his influences show in the architecture. The Falaknuma palace is a rare blend of Italian and Tudor architecture. Its stained glass windows throw a spectrum of colour into the rooms.

One of the highlights of the palace is the state reception room, where the ceiling is decorated with frescoes and gilded reliefs. The ballroom contains a two-ton manually operated organ said to be the only one of its kind in the world. The palace has 60 lavishly decorated rooms and 22 spacious halls. It has some of the finest collections of the Nizam treasure. Falaknuma houses a large collection of rare treasures including paintings, statues, furniture, manuscripts and books. The jade collection at the palace is considered to be unique in the world.

The famed dining hall can seat 100 guests at its table. The chairs are made of carved rosewood with green leather upholstery. The tableware was made of gold and crystal to which fluted music was added. The length of the table is 108 feet, and breadth is 5.7 feet and height is 2.7 feet. The palace has a library with a carved walnut roof: a replica of the one at Windsor Castle. The library had one of the finest collections of the Quran in India. The ground floor of the palace housed the living quarters. A marbled staircase leads to the upper floor. It has carved balustrades, which supports marble figurines with candelabra at intervals. There is a billiards room. Burroughs and Watts from England designed two identical tables, one of which is in Buckingham Palace and the other in the Falaknuma palace.

On the walls of the landing are many oil paintings and photographs of notable personages. The Falaknuma Palace also has the largest collection of Venetian chandeliers, with 40 138-arm Osler chandeliers in the halls. The telephone and electrical system was introduced in 1883 by Osler and the palace has one of the largest electrical switchboards in India. The palace was the private property of the Nizam family, and not normally open to the public, until 2000.

Here is the video tour.  Go ahead, click it. 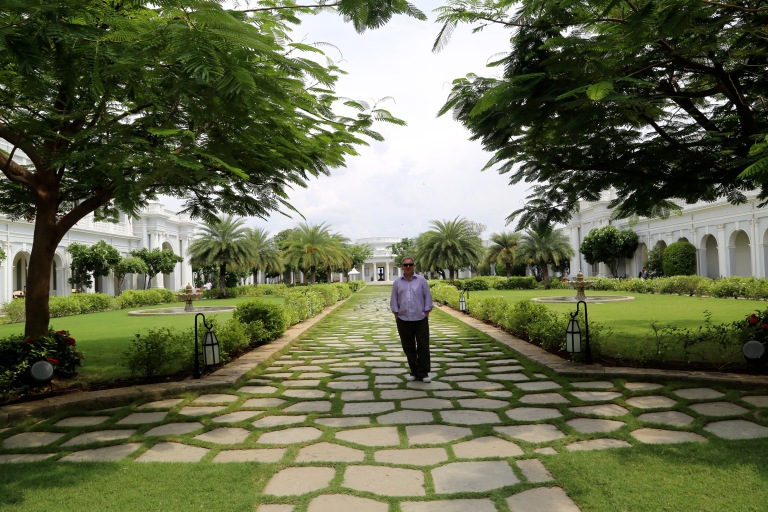 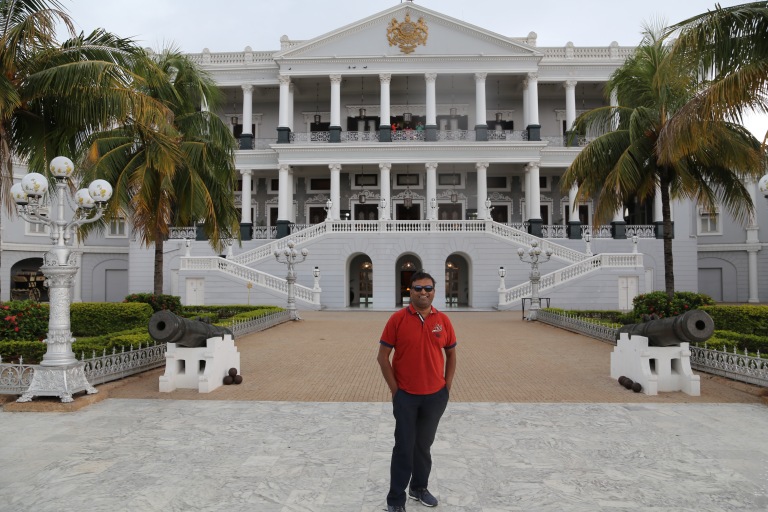 Here are few pics from the net, since I wasn’t allowed to take pics inside the palace.

3 thoughts on “Pizza in a Palace”