It is extremely rare to have 8 folks from Cigniti’s core management team in Dallas at the same time.  We are always on the road across geographies.  Once it was clear that all 8 of us going to at one place in town during the weekend of Oct 6th, excitement was back in air once again (after our recent encounter with Pavanism).  As usual, I have proposed jumping off 14000ft from the air as a team, which was shot down by our process and compliance guru Ramana, saying that so many executives from a publicly listed company can’t risk our shareholders 🙂

Next best thing proposed by Sudhakar, was a rendezvous at COWBOYS game at awe-inspiring AT&T stadium.   Read the blog for entire scoop, and/or just be amazed watching never been seen 7 ½ minute footage I have shot, since the launch of youtube.  You might feel as if you were also part of the amazing experience, we have encountered since beginning of our time (like you hear in movie teaser).  Truly, it was also never been so fun and easy to build a video documenting our experience

The Dallas Cowboys are known for their national following, and their games are always sold out. Cowboys streak of 160 sold-out regular and post-season games began in 1990.  Given the franchise shares the record for most Super Bowl appearances, we are all more than thrilled to consider Dallas as our second home. Broncos is considered as one of the most successful teams in the NFL since 1973, and suffered only 6 losing seasons in the last 35 years.  Hey, I have not made up all of this, and don’t even time to track it too.  Wiki says it 🙂  This season Broncos have never lost a game, BTW.   So, it is no brainer that it is not going to be very easy to get the tickets for a game between COWBOYS and DENVER.

However, our inner conscious assured us that Sudhakar being local celebrity / entrepreneur (celentreprenuer) will get us to the game one or other way.  Yes, and he did it with lots of ease and some amount of extra dough too.   Once he confirmed that tickets are locked in, on beloved WHATSAPP (which keeps us connected at one soul level and disconnected at another soul level at the same time), folks who are away from Dallas booked their flights to return 2 our second home base from the client location in various cities

As usual, we have begun some intense planning to make the experience unique and memorable.  I have proposed that we all wear cowboys’ jersey and flash dark goggles, to increase the cool factor.  Almost everyone was game for it.   Then followed planning for tailgate party outside the stadium.  Sanjay took the ownership for it, and got Brian, Akbar, Dadra to make preparation for it, who are known for hosting such parties previously

Raj proposed that we go to outlet mall in Allen to buy the jersies  Most of us wanted the jersey with Bryant name, but just couple of us got it. I am clueless about the current team, as it’s been a long time I have followed NFL, now that Hyderabad is my home base.   I have got the jersey with Romo’s name on it, of whom I did not know much.  We all assembled at Cigniti office 3 hours before the game, to start for the AT&T stadium together.  Raj sent an SOS saying that his car tire if flat, and would be delayed and will figure out a way to get to the stadium directly. Raj and “hassle free” travel rarely goes together.  He misses flights, forgets passport, someone next to him dies on the plane, connect flights gets missed causing him to get stranded, and the list keeps growing. I keep telling him to get the karma account loaded up a little, specially given that he is in the sales role

I was able to get to AT&T stadium with some ease thanks to GPS, but it wasn’t easy to locate the team, which was already parked at LOT 12 and begun tailgate partying.  Finally, Ravi sent me DROP PIN with precise lat/long of their park slot via WHATSAPP (which seems to be means of communications these days).  After an hour of partying, beer ping-pong, barbeque, and hanging out on the lot, we have begun walking to the AT&T stadium.  Several thousands of fans bee lined to the stadium, and it’s path was filled with folks wearing blue & white cowboys jersey, and equal number of fans wearing orange colored bronco jersey.  As we were taking the group photo, broncos’ fans interrupted and tried to sneak into our snap, in a friendly manner saying “let us add some color into your photograph”.  We did an equally enthusiastic friendly boo to them, and welcomed few random COWBOYS fans’ to be part of our group (which you can see below)

I have been to AT&T stadium tour last year, and it was mind blowing to learn know lots of trivia and the story behind it. AT&T Stadium (previously known as Texas Stadium) is an awe-inspiring stadium, and is famed to be 4th largest stadium in the NFL based on seating capacity.  Total capacity of the stadium including standing room is over 100,000.  It has the world’s largest column-free interior and the fourth largest high definition video screen, which hangs from 20-yard line to 20-yard line, which you will featured many times in the video below.   Again, I do not have mind space to remember all of that stuff. I just sourced it from WIKI (where else?).

Once got seated in the stadium, we felt as if we are in a gladiator arena.  Later, I have learned that I was one of the 92,758 wild fans who watched the game, which is coincidentally considered as one of the highest scoring thrillers in The NFL history (precisely standing at number 4).

The highest scoring games in NFL/AFL history (per web, note per my memory again)

Not too many words are required to explain our experience, now that you have already watched the above video. It was thrilling and madness all the way to the end.  All of us shouted so much, we were afraid if we are going to lose our voice next next day. There was quite bit of camaraderie between COWBOYS’ fan in the stadium, and amongst / between COWBOYS and BRONCOS fans too.  In that way, watching a game at AT&T stadium was pure fun and friendly, compared to watching in the stadiums in other states, where things could be hostile for non home base fans.  Thanks to the great seats, for the first time, we could see the game on the field with absolute clear visibility, and at the same time enjoy close-up visuals on mega size HDTV screen.

Though COWBOYS did not win the game, experience has been saved to WRITE ONCE, THEN READ FOREVER part of our memory segment in our brain.   Seat were great, company was great, and the game was just awesome.  What else one can ask for ?

Some snaps of Cigniti Boyz’ in action for your viewing pleasure 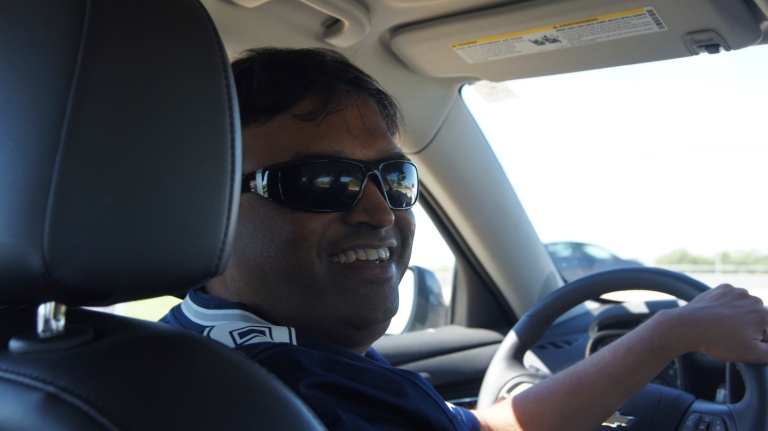 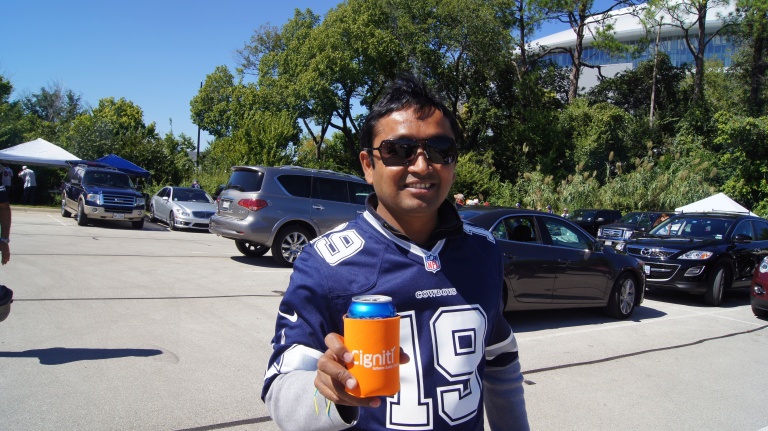 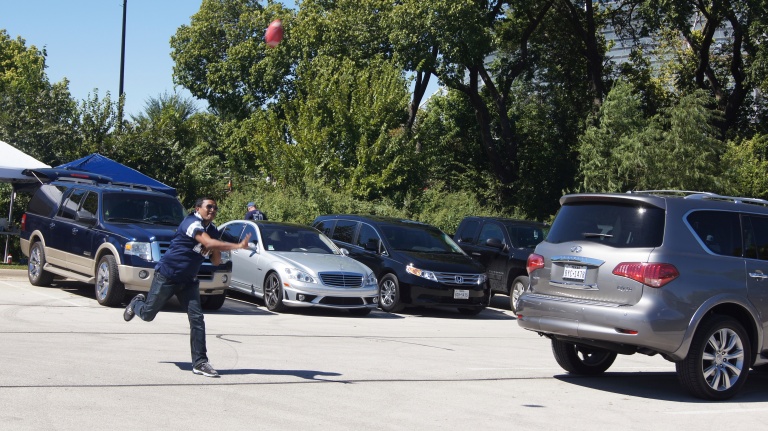 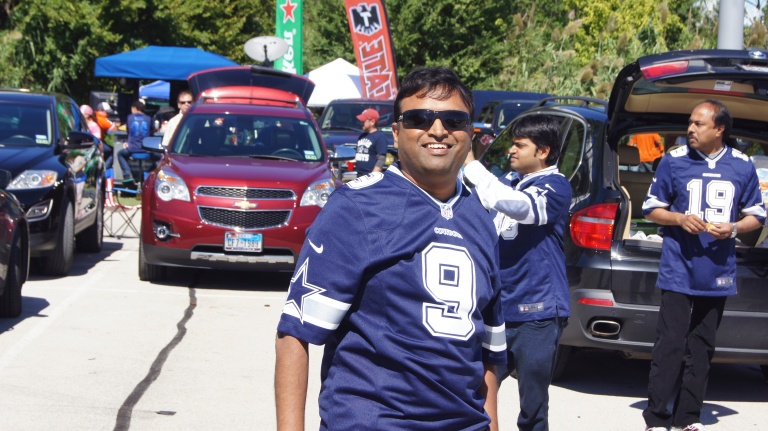 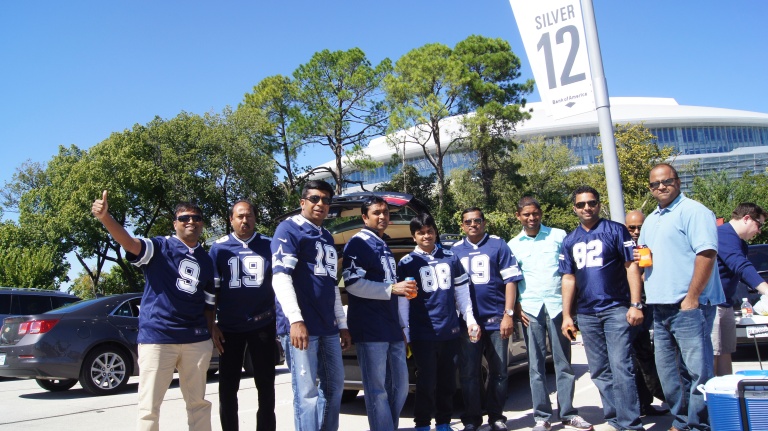 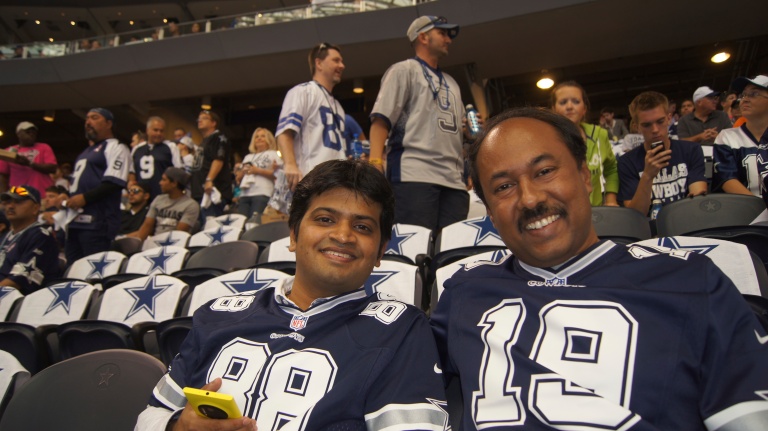