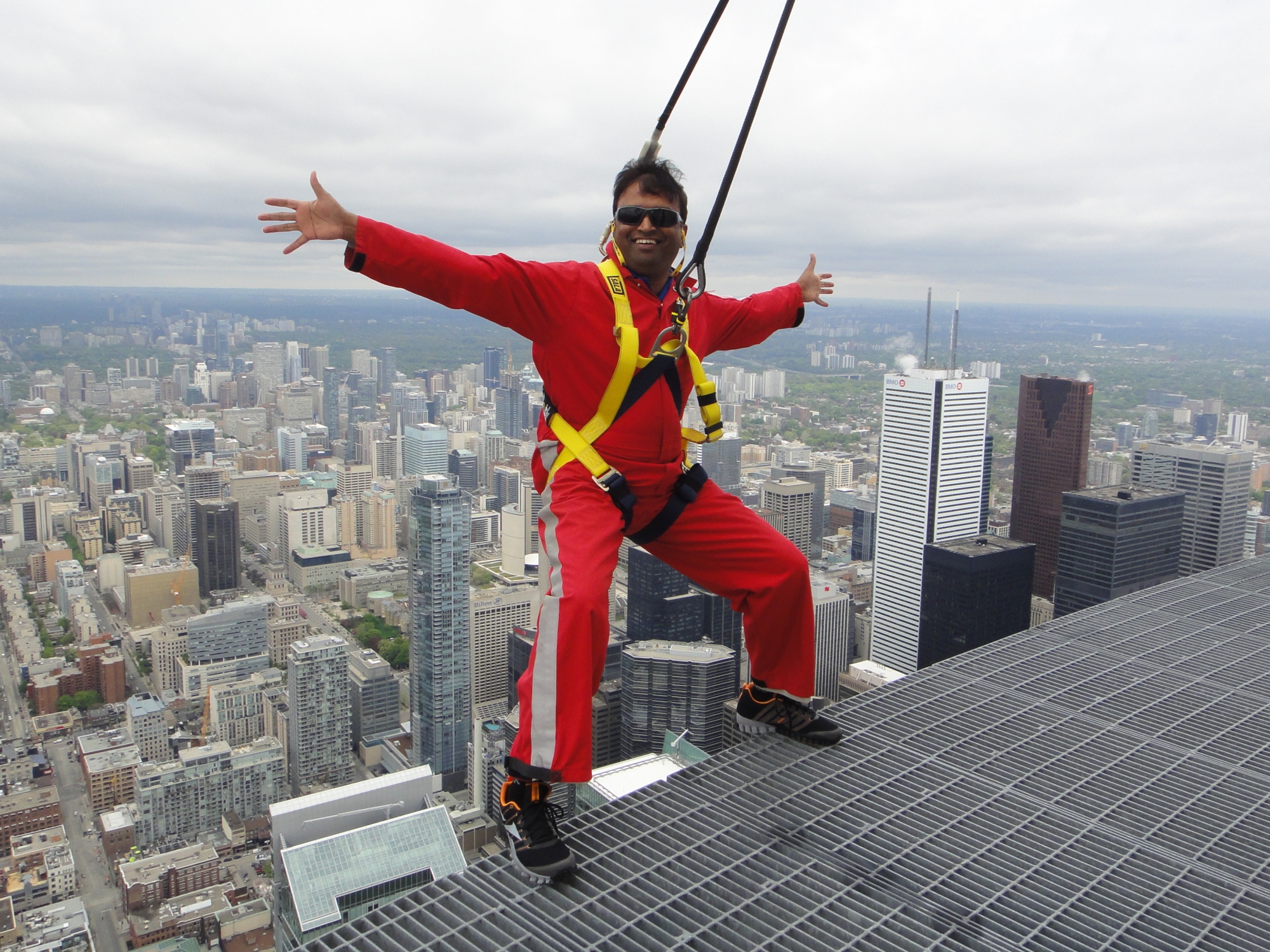 I often say I am heading to Dallas (or NYC, Chicago, just another town out there) once I know that I am required to travel to support a strategic pursuit in various roles. I rarely say, “I am heading to US”, as my (or folks out there) purview of the world has expanded significantly.  However, when I learned that I am required to spend few weeks in Mississauga, I started saying, “I am going to be in Canada”.  Not sure why, may be because it a brand new territory for me to explore.

First thing I do when I learn about my destination and new gig, I learn as much as about my customer’s business drivers and engagement objectives, to ensure max bang on their buck spent on Cigniti.  Then I would Google on what I can do out there, and to learn more about food, culture, and do things which are little “hatke” (if there is still any time left at all).    So, I learned about EDGE WALK on CN Tower, based on quick Google search.    CN Tower was considered as  the World’s tallest tower for about 36 years from 1974 to 2010.  Now they call it as tallest tower in Western Hemisphere.  I am sure this record will also broken this decade. So, it is no brainer that I thought we should check it out.  For a change, I had company this time, with Sachin and Ramana being in the same place along with me.

Until I started learning about Canada, I haven’t realized it is second largest country in the world (in terms of area). It also refreshed my memory that it was once dominated by French, and then later by British. I clearly see their influence now with some territories heavily French oriented, and see French as the second language everywhere, and Canada adopting MKS system unlike “FPS” followed by US.   When I went out to rent my car, the guy at the rental car said, I have 4000 to drive on the car within a month. I said. “Cool, 4000 miles”.  Then he corrected, “It is 4000 KMS.

Mississauga and Toronto, the two places I spent last week, appeared not much different from any average American city.  But I found folks here to be extra friendly, and felt “home” immediately.   City is expansive with lots of space for everything. I am fortunate enough to be spending time in the reasonably best time of the year.  We have freely walked around the town most times of the days, without much anxiety about our safety. I see most of the area to be heavily cosmopolitan with crowd from all over the world.  It is a like a melting pot of so many different cultures. We are staying in a high-rise apartment complex on 26th floor with some great views.  Photos can be seen below.

We spent our fist weekend in Toronto downtown, primarily exploring food and entertainment.  There is plenty of choice of great selection of food. We did check out the EDGE WALK.  Though experience is not as thrilling as sky diving, it is fun to see awesome views of Tornoto for about 1 hrs from the top of CN Tower.  On a clear day, you can see up to 160 miles, including Niagara falls from the tower.  Ticket for this adventure is pricy, but justified by the overall setup and private experience.    We were taken to the top of the tower, in a private elevator with a partial glass floor.  We also got an exclusive access to SKY POD.  So high, we can see planes flying down beneath us

We were group of 5, three folks from Ciginti, 2 folks from local city (a guy and a girl, who were dating for an year, and celebrating their first dating anniversary).    We have checked many times with usher, ticket clerks, and the folks who got us ready for the experience, on the SAFETY of the experience.  All of them did say, “Trust the equipment.  It is 100% safe”.   My primary question, would the rope / harness stretch long enough for us slip from the edge.  They unequivocally said, “No”.  They iterated, “Trust the equipment and enjoy”.

That’s what I did.  I stretched and leaned back enough with ZERO fear.  Few others were little anxious first round.   The girl in the crowd was very anxious until we started walking on the edge, and was at ease then.  To our surprise, the guy chickened out and was very uncomfortable being on the edge

Sachin and I compiled a video using iMovie with selection of clips given by CN Tower team, and our snaps.  Check it out below.  Later in the week, we walked around the Mississauga.   “Absolute Towers” with rather unique design attracted our attention.  My colleague called it as “Sexy Towers”.   Our place of residence is just a block away. It is a great reference point for us, and made us not use the GPS.   We took several snaps of “Absolute Towers” from various angles.  Check out the snaps below. We also went to Center Island, so that we can have a clear view of Toronto Skyline, and capture few beautiful moments.

Here is the video of our experience:

Here are the rest of the snaps:

View from our apartment 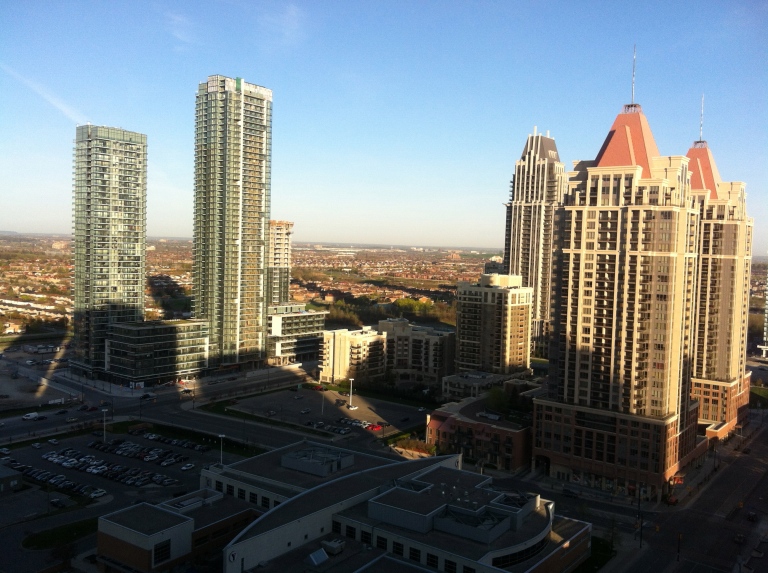 View of our apartment from the park across the street 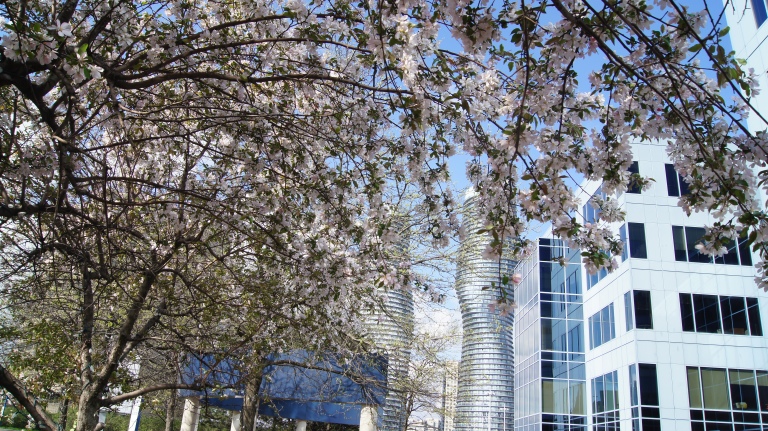 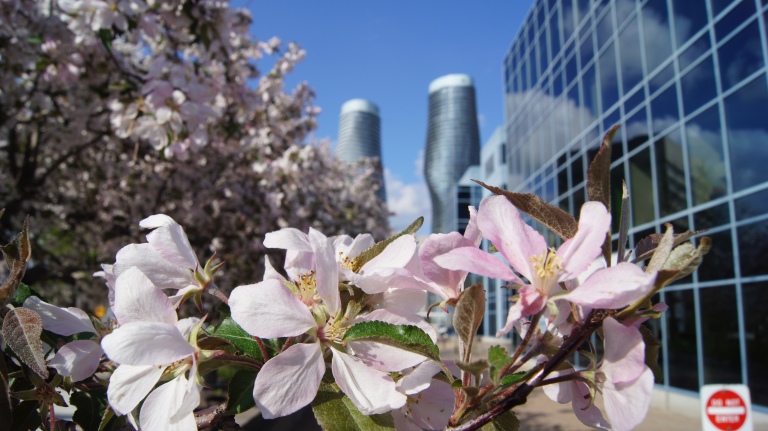 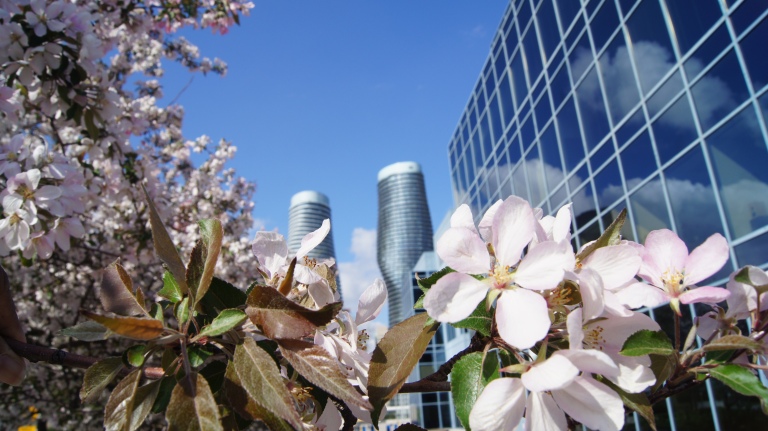 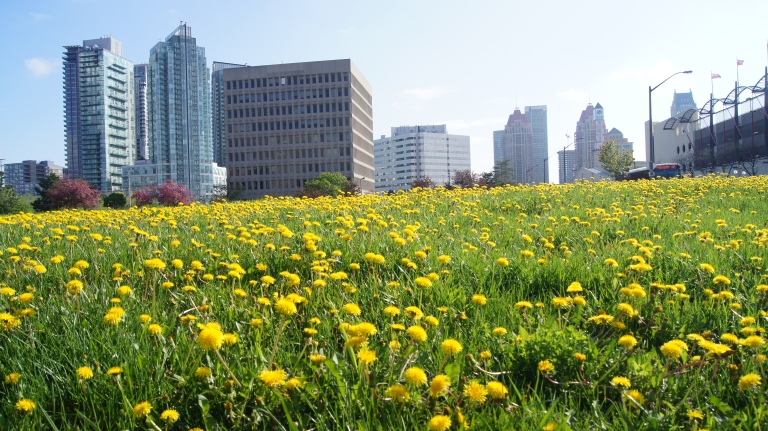 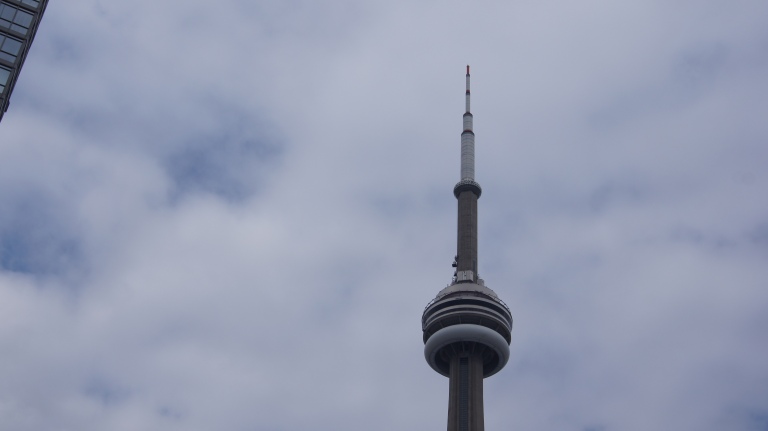 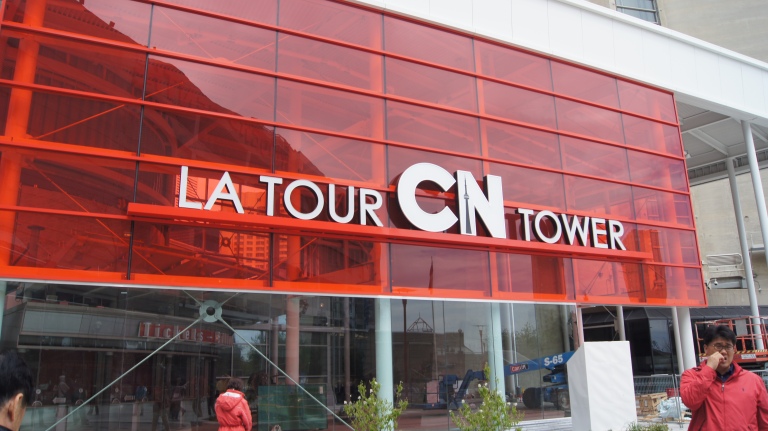 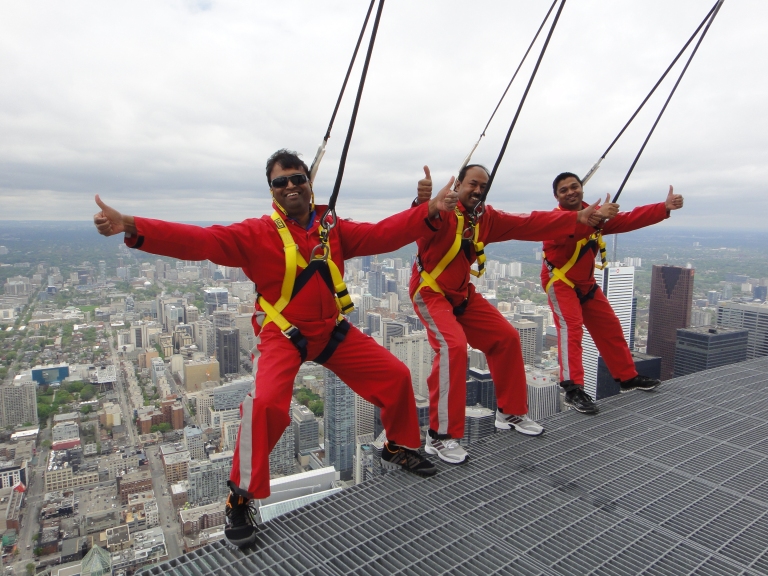 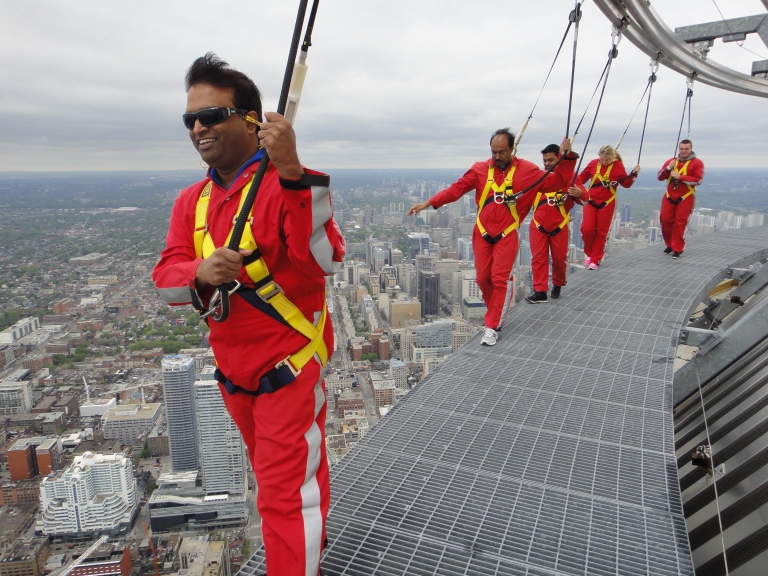 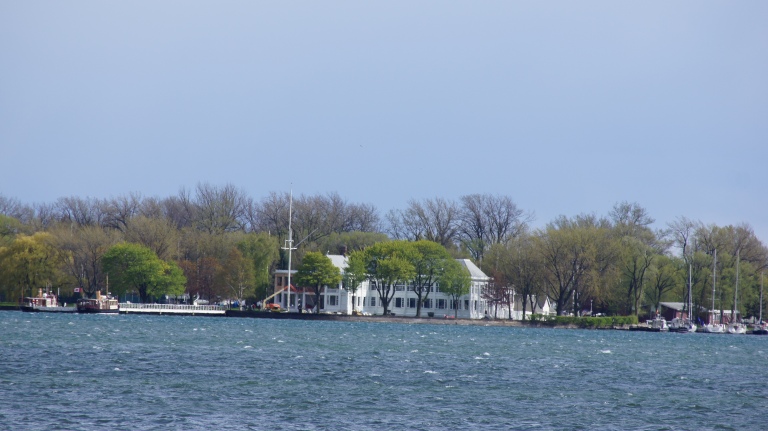 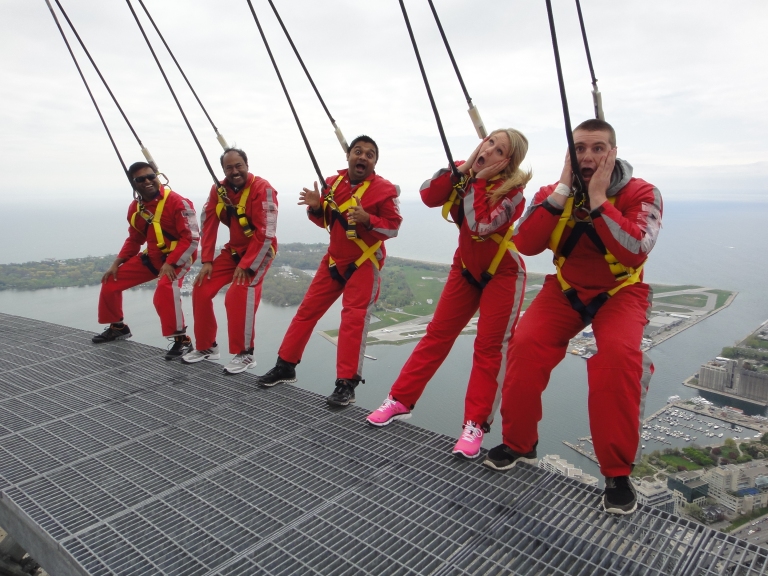 Walking towards the CN tower

CN Tower as we walk towards it

3 thoughts on “Walking on the edge”