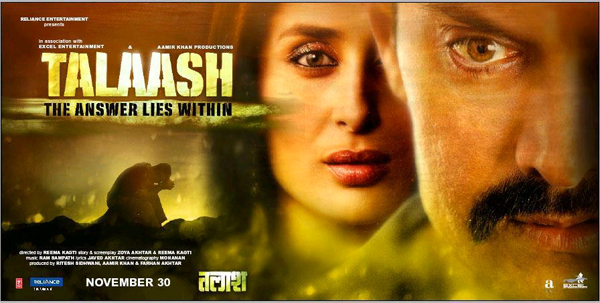 Watched the much awaited “Talaash” today along with few buddies. While driving to the INOX, my friend gave his iPhone to me and asked me to check out the FaceBook (FB) message. Thinking it is a joke; I immediately read the message to much disappointment.

Message on FB said something like this. “I hate folks who watch Hindi movies in Middle East and post the review on FB even before the morning show gets screened in India. Now I know that XYZ is the murderer”. (I replaced the name with XYZ so that you will not freak out)

I shrieked at my friend for possibly ruining the movie to me with the spoiler. He said, since he and other friend in the car accidentally saw the note, they wanted me to join the party of “disappointment” as a “team”

We debated through out the journey, if the post on the FB is a hoax. But given that anything is possible, we entered the screen with mixed apprehension. We were watching character XYZ’s expression little extra close for first 15 minutes and confirmed FB post was a hoax rather quickly

Verdict: When was the last time you were seriously disappointed with anything that has Amir Khan’s name on it? There is a good chance you wont this time too, though Talaash is inspired by multiple Hollywood blockbusters. I would not list the movie names here now, to avoid giving clues on how the movie unfolds. Movie is quite long with duration of close to 160 min. Half of the movie is fast paced in “whodunit” style, rest half appears as if it’s dragging or digressing. But all the pauses, dots, and deviations get connected & joined in last 15 minutes of the movie with reasonable satisfaction.

If you are planning to watch the movie, do it quickly before someone ruins by giving too many clues on the theme or the worse (tells you the ending that Katrina Kaif does it)
OK OK. Don’t freak out. Katrina is in another Khan’s movie.

One thought on “Talaash – Go for it, before someone tells you how the search ends”