It was summer of 1990 and I just landed in Hyderabad Begumpet airport on Indian Airlines from Bombay (yes, it used to be called as Bombay at one time) to Hyderabad.  I had landed in previous night in Bombay via Panam Airlines (which no longer exists, Google will tell you why to avoid a lengthy blog).  I came to Hyderabad on a 70-day vacation, as I had planned to skip summer school (of Masters in Computer Science)

I had gotten my India ticket on AMEX card.  Not many students knew the difference between a credit card and charge card during the early days. It was in spring of 1990 I got my first green card (i.e., American Express Charge Card).   It was a big deal to get a credit card in those days, given the lack of credit history.  I was at Texas A&M University for FALL 89 and SPRING 90.   I was staying at College Station Apartments, the popular Adda for Desi students.  It was a celebration in my apartment zone when I got the card (or pretty much whenever someone got their first card).  As a tradition I was also obligated to throw a party and charge it on my AMEX card.   So, usual pizza orders followed

I remember going to Little Caesar Pizza in the campus multiple times to host various groups of friends and charge it on my AMEX.  Copycat syndrome followed.   Several folks got their first charge card.  Some folks continued to think it was a credit card.   There were many Pizza parties (and other exotic parties that cannot be documented here) in the college station next few months. For the first month some felt they were spending as if it was FREE money.   The pain (followed by few tears) was realized once everyone got their first monthly bill and learned that they need to payoff entire amount every month

It was those during early summer, AMEX introduced a plan “Travel Now Pay Later”.  You will get to charge your entire India ticket on AMEX, and just pay minimum of $39 every month. Not many folks read the fine print, how much interest AMEX was charging (or not many really cared about it). It was later realized that it will take 20 years to pay off $1400 ticket to India, if one choses to do minimum payment of $39.  I paid it FULL in 4 payments.

I charged my entire ticket on AMEX and got the tickets on PANAM Airways.  PANAM offered “Triple Miles”, which allowed us to earn 30000 miles in a single trip, and allowed purchase of 10000 miles for a moderate fee.  Since we just required 40K miles (unlike 100K miles now) to get a free round trip ticket, it was a popular choice.   The deal spread like a wild fire on USENET group at that time, also called as “soc.culture.indian” group.  I guess one of the reasons for its shut down too.

When I left to US for the first time on Jan 3rd, 1989, there were easily 200 folks at airport to see me off.  There were usual emotional roller coaster events at the airport, and several dozens of garlands and bouquets.  There were lots of sweet packets too.  So usual last minute struggle of shoving all those packets into carry on bag would go on.

There was a sidebar debate of which packets to put in.  Most of them would be look same.  1KG Gulab Jamun or Combo Sweets or Ajmir Kalakhand etc, packets.  Who would be less offended, if their representation of Pulla Reddy (or some John Doe Reddy) packet does not make it to my suitcase?   My mom, and her sister (and my sister-in-law etc) would do quick processing of complex algorithmic prioritization of relationships, and said, “Put these few packets in” and rest would be put in another bag in a stealth mode (so not to offend anyone)

Don’t you worry.  Those packets would be enjoyed later at my home, where my parents would host over 100 guests assembled at my home discussing my departure having usual instant snacks such as poori, besan, followed by hot chai.

So, it was like some dignitary going on a foreign trip.   I guess people used to have so much time, belongingness and affection during those days.  Less traffic and proximity to the airport did help too. My family rarely comes downstairs to see me off now, as I head to US or some other country once in a quarter or less.  For them, it is now like as I am going to a super market.  They do actually.  They usually give me a list of shopping list to bring along with me, which mostly includes typical super market items (except perishables)

As I came out of the airport, there were over 100 folks welcoming me.  There were beaming smiles everywhere and with lots of repeat questions (How are you, how was the trip, you became fair, you have put on weight, do you remember me) and hugs and me bowing down to all the elders.

Though I am known to have temporary amnesia but put on my happy face and wished everyone “Hey how are YOU..” without really calling out there names.   These days, when someone stops me at a movie theatre or restaurant or airport (the three places I am usually spotted) and asks me “How are you”.  There is a good chance; I would not remember them instantly.  I ask about 3 questions to recollect their name (without causing me or them embarrassment).  “Are you still working in the SAME project” (to check if they are from AppLabs or Cigniti),  “Are you still in the same COMPANY” (to narrow down my guess),  last resort question “What is your new EMAIL address. Did it change recently ?” (that would nail down their name)

I could recognize pretty much everyone except one gentleman, in that crowd.  He garlanded me with extra thick flowers.  I whispered to my elder brother, “Who is he?” to avoid embarrassing the person.  He said, ‘He is your prospective father-in-law” to my shock.  I got escorted into my car surrounded by my brothers, sister, and cousins me. Several others chased our car on scooters and motor cycles. We owned one of the two most popular (or should I say common or affordable) cars in India. Guess what it is.  It is a light blue colored FIAT.  3848 is the license number that I remember.  My home was just 10 minutes from the Airport, near Paradise area

There were several folks waiting at my home entrance, neighbors, friends, and some more relatives.  Usual plethora of questions followed (see above).  My maids and drivers asked me “Bagunnarra Setu” and if I still remember them.  My paternal grand mother said to me, “I did not think I think would LIVE to see you again”, which caused some more folks to get emotional.  She made the same comment to me for next 12 trips to/from USA. She lived happily and in perfect health for next 18 years and passed away without any illness at the age of 89 years (Separate blog on her)

There was also a hidden sigh of relief around I can sense, as I landed as single Indian male. I never knew that my Mom was under a fear that (obviously influenced by famous Telugu movie, Eenadu news paper stories, and whispers from everyone else) I might return to Hyderabad with an America Ammayi (White Caucasian girl) next to me.   Obviously she and others in India had no idea, how difficult is to make that possibility into a reality (most of you know the reasons)

On Jan 3rd, 1989,  few hours before I boarded my maiden flight to Houston, My Mom took me to our Pooja mandir made me a promise to her and the gods present in the Pooja room, that I would be stay grounded and would not do any “funny” stuff that would make our Khandaan look bad.   I would say that “promise” did help me stay grounded in US.

Part 2 – Who is the unidentified person attempting to garland me at the airport ?.  No he is not Radhika’s dad.  Journey to find Radhika hasn’t even started.  Hope to complete it when I am with my Mac Air and there is no internet connection available and I am secluded.  Unfortunately there is WIFI on Mt Everest too now 😦

On the eve of 23rd anniversary: 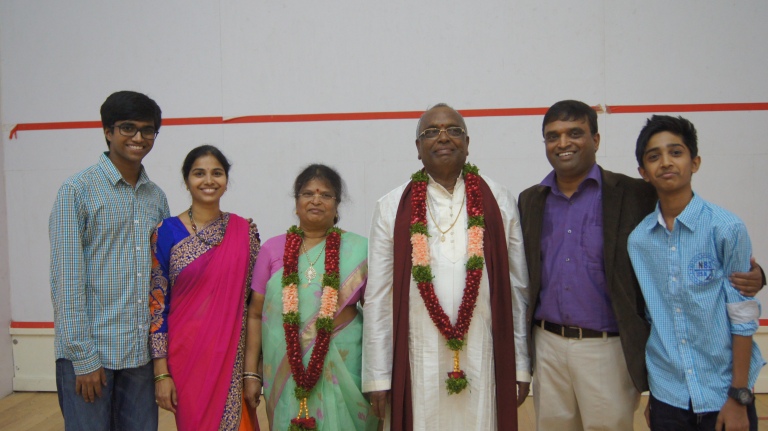 Radhika in Kashmir 3 years ago 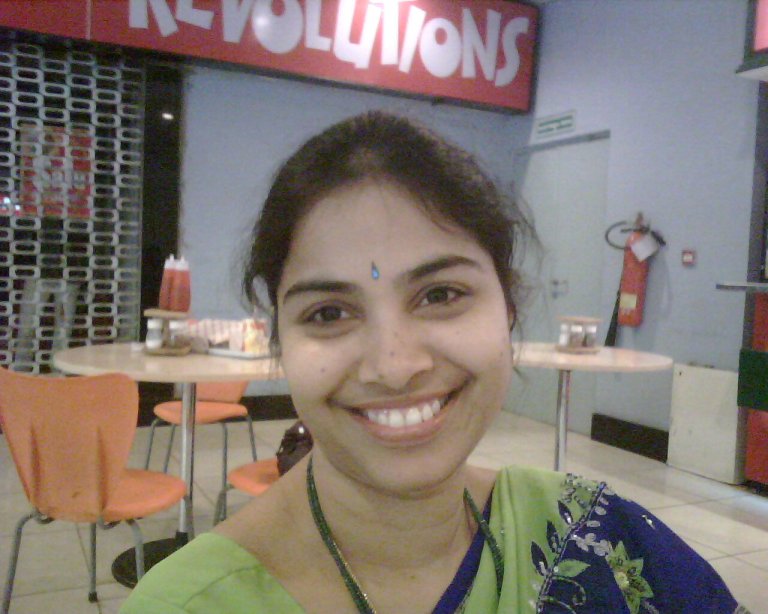 Lunch with Radhika at PepperPod in 2009 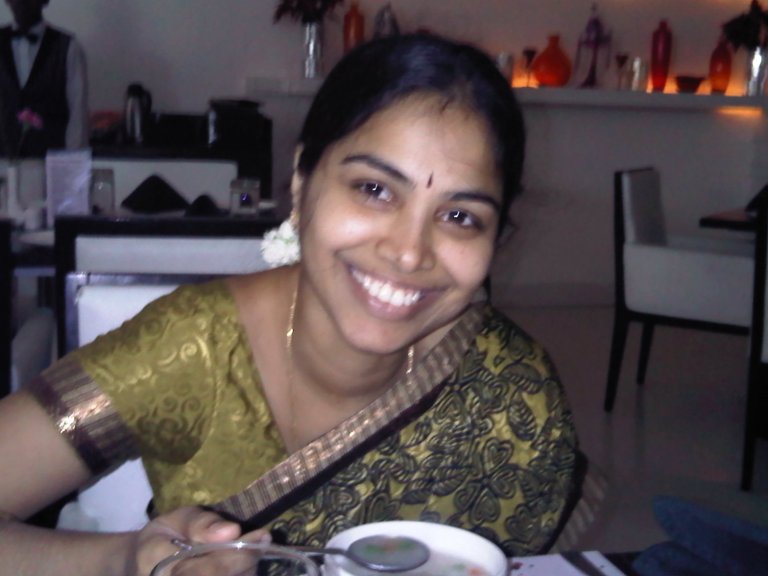 Radhika in 2000 during famous Y2K days

Radhika few months after the marriage, seems like, child marriage 🙂

On our wedding day 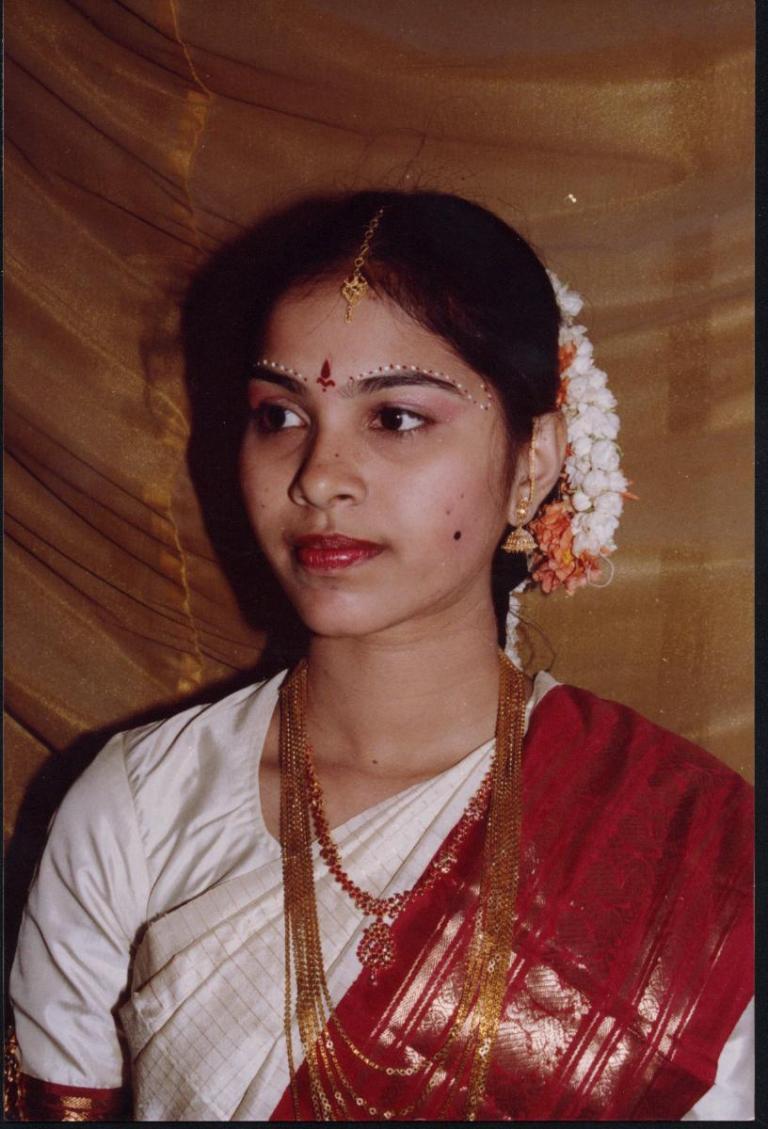 More to come in the future blog 🙂